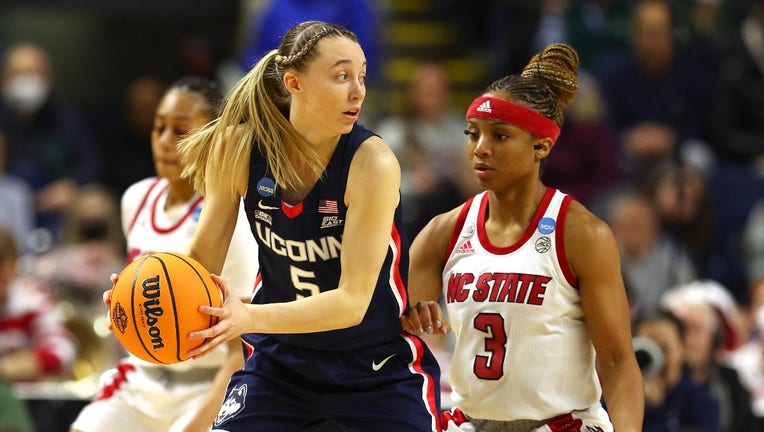 Kai Crutchfield #3 of the NC State Wolfpack defends against Paige Bueckers #5 of the UConn Huskies during the first half in the NCAA Women's Basketball Tournament Elite 8 Round at Total Mortgage Arena on March 28, 2022 in Bridgeport, Connecticut.  ((Photo by Elsa/Getty Images))

MINNEAPOLIS - It took double overtime to get there, but Paige Bueckers is coming home to try to lead UConn to a national title.

Bueckers scored 23 of her game-high 27 points in the second half, shooting 8-of-9 from the field and 6-of-7 at the free-throw line as the Huskies beat N.C. State 91-87 in double overtime to advance to the NCAA Women's Final 4 in Minneapolis. Two years ago, the former Hopkins star was a McDonald’s All-American, the No. 1 recruit in the country and didn’t get the chance to finish off her high school career with a state championship because of the COVID-19 pandemic.

Next weekend, the Huskies will likely have home court advantage at Target Center, with Bueckers playing in her home state.

"Two days ago I said win or go home. But we won and I’m still going home so this is crazy. I’m just so excited," Bueckers told ESPN’s Holly Rowe after the win.

An NCAA title is about the only championship Bueckers doesn’t have. She led the Huskies to Final Four last year, only to lose to Arizona in a stunning upset in the semifinals.

Bueckers is back, but arguably still not 100 percent, after suffering a knee injury in the closing seconds of a win over Notre Dame on Dec. 5. Bueckers missed about two months recovering. Monday night, the Huskies lost forward Dorka Juhasz after just three minutes due to a serious wrist injury.

The Wolfpack hit big shots at big moments to force two overtimes, but UConn had just enough to pull of the win. Bueckers had just four points in the first half, but turned it on in the game's biggest moments to allow the Huskies to survive and advance.

"It just signifies what we’ve been through all year. A whole bunch of adversity, highs and lows, ups and downs. But we stayed composed and stayed together. I just love my team," Bueckers said.

The Huskies advance to their 14th straight Final Four, and will play Stanford on April 1 at Target Center.