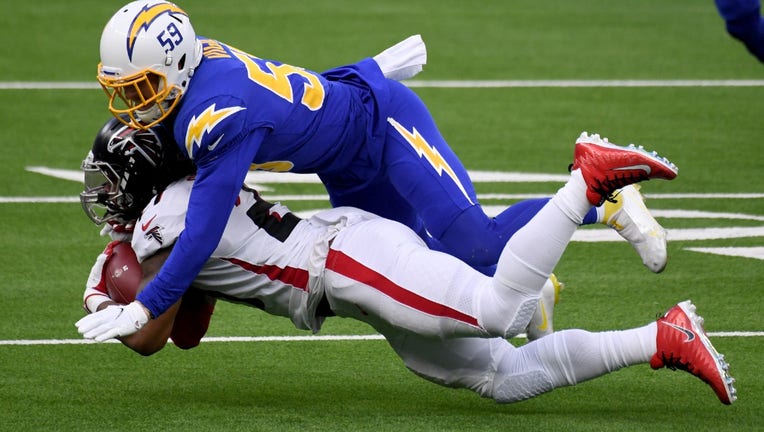 Outside linebacker Nick Vigil #59 of the Los Angeles Chargers tackles running back Todd Gurley #21 of the Atlanta Falcons iin the first half of a NFL football game at SoFi Stadium in Inglewood on Sunday, December 13, 2020. ((Photo by Keith Birmingham/MediaNews Group/Pasadena Star-News via Getty Images))

MINNEAPOLIS - When he’s not busy playing football, Nick Vigil is an avid outdoorsman. He loves to hunt, fish and grew up horseback riding. He even spent some time riding not fully-grown bulls.

Tuesday, Vigil made the next step in his NFL career official by signing a one-year deal to join the Minnesota Vikings. A third round draft pick in 2016, Vigil spent his first four seasons on special teams and at linebacker with the Cincinnati Bengals before playing for the L.A. Chargers last season.

One of his main reasons for coming to Minnesota? Playing for Bengals’ defensive coordinator Paul Guenther, in the Mike Zimmer coaching tree.

The newest Viking boasts a unique background and should help the Vikings on both defense and special teams.

"Historically they’ve been one of the best defenses in the league. They’ve got a lot of really good players at linebacker and on the D-line and in the secondary," Vigil said Tuesday. "I’ve played in the system under Paul Guenther when I was with the Bengals, so very familiar with the system. So that’s really appealing to me."

He'll join a linebacker corps that already includes Anthony Barr and Eric Kendricks, and a revamped defense that’s added Dalvin Tomlinson, Patrick Peterson and should have Danielle Hunter and Michael Pierce back for the 2021 season.

Needless to say, Vigil is excited to get to know Kendricks and Barr, and compete with them.

"I’ve seen a little bit of what they do, they’re two really good players who are really talented and have been good for a long time. Just to be able to play with two guys like that, I’m very excited," Vigil said.

Vigil spent three seasons playing football at Utah State with his brother. The two grew up staying plenty active outside, even doing bull riding in Utah. But that had to end after his younger brother suffered a head injury in an accident while riding when they were kids.

Their mother said it was time to focus on football, and get away from the bulls.

"It wasn’t that bad. He fell on his head and they thought he had a broken neck. But he didn’t, he was fine," Vigil said.

Vigil comes to the Vikings to play in Zimmer’s 4-3 defense, and is comfortable playing all three linebacker positions. His deal to come to Minnesota came together quickly at the start of free agency, and Vigil considers the Vikings a good fit for his skills.

When he’s not playing or working out at TCO Performance Center, it’s a safe bet Vigil will find time to go hunting or fishing.

"They’ve got a good culture here and they’ve won at lot of games in the past. We just felt like it was a really good fit. Here we are," Vigil said.