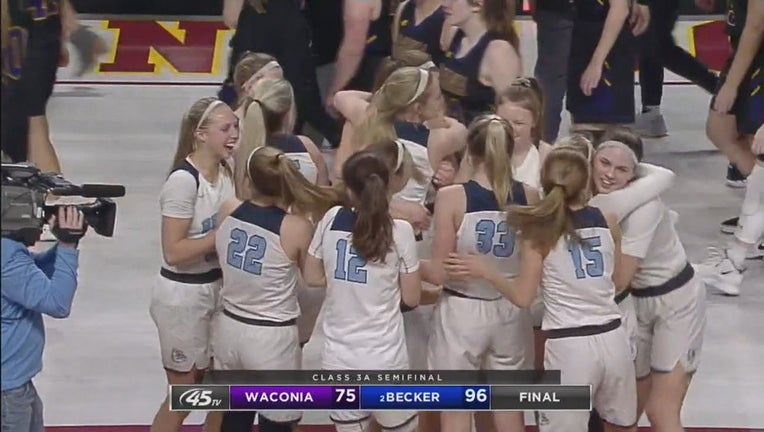 MINNEAPOLIS (FOX 9) - Minnesota high school basketball will have a bit of a different feel two years from now.

The Minnesota State High School League on Thursday approved a measure to implement a 35-second shot clock for all boys’ and girls’ varsity basketball games, starting in the 2023-24 season. League members voted unanimously at their board meeting to approve the measure.

A shot clock can also be implemented at lower levels, with the consent of both teams. The use of a shot clock has been a hot topic in Minnesota, with some schools facing financial burdens to have them installed and others needing additional help to have them operated for games. A 2014 boys’ state basketball tournament game fueled the discussion even further.

Hopkins beat Shakopee 49-46 in four overtimes. In each overtime, the team that won the opening tip sat on the ball for the entire five minutes, with the team on defense not forcing the team on offense to initiate anything. The Royals eventually won the game after Amir Coffey, who went onto star for the Gophers and is now in the NBA, hitting a half-court shot to win the game.

Enforcing a shot clock will make teams initiate more offense, and get a shot up within 30-35 seconds.

Many coaches like Ken Novak, who has coached at Hopkins High School for more than 30 years, says the long-debated high school shot clock is good for players and the game.

"I personally think it’s a great idea. I think it’s good for skill level, it changes the tactics to become a little faster, the strategy starts shifting," Coach Novak said.

Hopkins installed shot clocks during a recent upgrade to their fieldhouse in anticipation for the rule change. Coach Novak says the change won’t have a large impact on their game play, but will change coaching strategies.

"Most of the time shots are put up in the first 15 seconds," Coach Novak said. "It does change the strategy and the tactics."

Novak explains when a team is ahead, during the last few minutes of the game, they typically keep possession of the ball, avoiding shooting any shots, to prevent the other team from getting possession and having the opportunity to score.

Hopkins Girls Basketball Coach Tara Starks is also on board with the change. She says "it’s about time" the league committed to shot clocks.

"For the betterment of the girls and the game and preparation, I think it’s needed," Coach Starks said.

Many players also seem to support the change and even have experiences with shot clocks in off-season leagues and tournaments.

"It speeds the game up a lot, so I feel like it’s good," Hopkins junior and girls basketball player Nunu Agara said.

Schools not in favor of the shot clock say the equipment could be expensive to buy and install. Plus, schools have to ensure they have an extra person to run the clock during games.

"I do have a small concern on if we’re going to have the bodies and people to run it at every facility and at every game, but I’m hoping people get interested and love the game enough that someone will step in," Starks said.

Also on Thursday, MSHSL officials adjusted the venues for this year’s boys’ state basketball tournament. Target Center isn’t available for the entire tournament, so games will be played at Williams Arena, and Concordia-St. Paul.