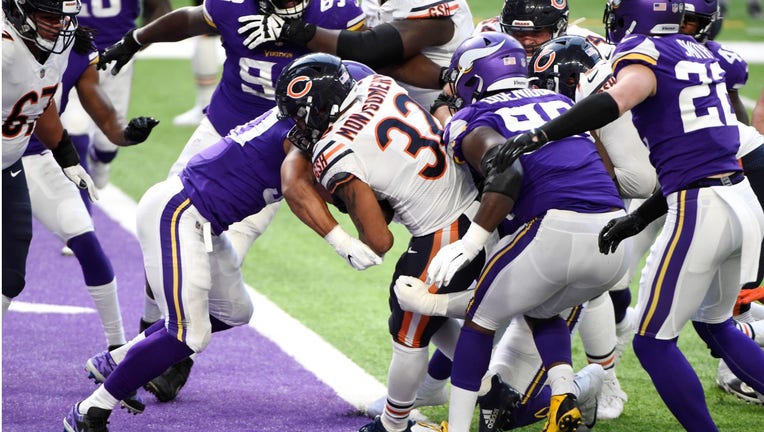 David Montgomery #32 of the Chicago Bears rushes for a second quarter touchdown against the Minnesota Vikings at U.S. Bank Stadium on December 20, 2020 in Minneapolis, Minnesota. ((Photo by Stephen Maturen/Getty Images))

MINNEAPOLIS - The Minnesota Vikings have two regular season games left, and they’re on the outside of the NFC Playoff race looking in after a 33-27 loss to the Chicago Bears on Sunday at U.S. Bank Stadium.

When the Vikings faced the Bears on Monday Night Football at Soldier Field a month ago, Chicago didn't score an offensive touchdown. Their points included a Cordarrelle Patterson kick return for a touchdown, and a pair of field goals. Sunday, the Bears gashed a Vikings’ defense without Eric Kendricks for nearly 400 yards, including 199 on the ground. David Montgomery, who missed the Monday night match-up with an injury, powered through the Minnesota defense for 146 yards and two touchdowns.

A Hail Mary attempt from Kirk Cousins with seven seconds left was intercepted, the Vikings lost their second straight and fell to 6-8 on the season. The drive before that, after a Cameron Dantzler interception in the end zone, Minnesota needed to go 80 yards to tie the game or take the lead with less than three minutes to play. The Vikings ran the ball to Dalvin Cook, threw a short pass to Cook and ran Cook for no gain before a Cousins' prayer fell incomplete for a turnover on downs.

The Vikings now need to win their final two games at New Orleans and Detroit, and get some help, to make the playoffs.

"We’re disappointed," said Vikings coach Mike Zimmer, who didn't have much to say after the loss.

It's the Vikings' fourth loss this season by eight points or fewer, or that's come down to the final possession.

"It's certainly not where we wanted to be. You look back and you think about some really tough losses, one play here or there throughout the season that you know you’re so close. That’s why when you prepare all week, when you’re in the game, you feel that intensity and that tension on every snap," quarterback Kirk Cousins said. "You know that it really is one snap that can make the difference in a win or loss, going to the playoffs or not going to the playoffs. It’s just the way it is, every game is back and forth and it tests you. This season is just another reminder of that."

Benched earlier this season, Mitchell Trubisky finished 15-of-21 for 202 yards, a touchdown and an interception, and made enough plays with his legs to keep the Vikings off balance. The Bears averaged more than six yards per play.

After punting on its opening possession, the Bears scored points on six of their last seven drives. With the season potentially on the line, the Vikings’ defense allowed 33 points and 397 total yards.

"I just feel like we didn’t have the recipe to play as one. We couldn’t stop the run as well as we did in the past. We just have to be able to learn from it and finish the season out strong," said Dantzler.

The Vikings tied the game 7-7 in the first quarter on Cousins’ short touchdown pass to Adam Thielen. But the Bears answered with 10 points to take a 20-10 lead at the half. The Vikings gifted Chicago a field goal in the second quarter after Cook got stuffed on a 4th and 1 run up the middle, with Minnesota at its own 34-yard line. The Vikings' other miscue in the half came after Irv Smith Jr. dropped what would've been a touchdown on third-and-goal.

Cook scored from 1-yard out to get the Vikings within 20-17 in the third quarter. Montgomery answered with a score from 14 yards out to put the Bears up 27-17. Tyler Conklin’s first career touchdown on a 20-yard play got the Vikings as close as 30-27 with 8:05 to play. They got the ball two more times, and didn’t have the Bears' defense fooled with their play-calling.

Cook finished with 24 carries for 132 yards and a score, but when it mattered most late in fourth quarter, the Bears stopped him.

"We had an opportunity at the end to win it. We just didn’t win it. The defense did a great job of giving us back the ball to win the football game and we didn’t win it. We’ve got to look ourselves in the mirror and go back and fix some things," Cook said.

Cousins finished 24-of-31 for 271 yards and two touchdowns despite being sacked three times and pressured much of the game. The two biggest bright spots for the Vikings were Justin Jefferson and Dan Bailey. Jefferson finished with eight catches for 104 yards, breaking Randy Moss’s single-season record in 1998 for catches (69). Jefferson is now at 73 on the season. Bailey, after missing seven kicks the last two weeks combined, was 2-for-2 on field goals and 3-for-3 on extra points Sunday.

In a game with the playoffs potentially at stake, Montgomery ran over the Vikings' defense, Trubisky made enough plays and Minnesota's offense faltered in key late situations.

"I’d say the defense has to look in the mirror," Zimmer said.

Now the Vikings face the Saints on a short week, with a Christmas Day match-up ahead. Without fans at U.S. Bank Stadium this season, the Vikings went 3-5 on their home field.

"Certainly not the way we wanted to end the final home game of the season. There are so many plays you can point to, you go back and agonize over. Now we have to get ready on a short week for a good football team at their place," Cousins said.