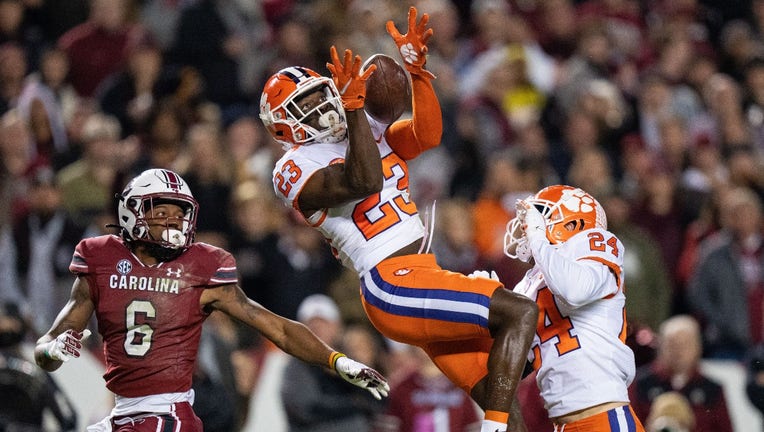 Cornerback Andrew Booth Jr. #23 of the Clemson Tigers makes an interception on a pass intended for wide receiver Josh Vann #6 of the South Carolina Gamecocks in the second quarter during their game at Williams-Brice Stadium on November 27, 2021 in Co ((Photo by Jacob Kupferman/Getty Images))

MINNEAPOLIS - With a new front office and coaching staff in place, the Minnesota Vikings stressed finding tough, smart and competitive football players in the NFL Draft.

After a whirlwind weekend that featured 11 trades, including moving their first and second round picks, Kwesi Adofo-Mensah and the Vikings finished their first draft with 10 new players. Adofo-Mensah and Kevin O’Connell will get to see them in action on a football field for the first next week, when players come to town for rookie mini camp.

Adofo-Mensah and O’Connell broke down tape of some of the team’s top prospects with reporters on Wednesday at TCO Performance Center in Eagan. The two talked about adding versatile players who are instinctual, and love playing football. They feel they accomplished that in the draft.

"(Bill) Belichick always said talent sets the floor, character sets the ceiling. Who’s that person who wants to hit the bag in August with intent and purpose?" Adofo-Mensah said. "I think it’s that person. It’s that mindset, is that person wired to get better consistently? That’s the people that make it in this sport."

Adofo-Mensah and O'Connell had four questions for each position as they went through draft evaluations before finalizing a decision on a selection.

The Minnesota Vikings have announced a game in London against the New Orleans Saints as part of its 2022 schedule.

O’Connell gave fullback C.J. Ham as an example when talking versatility. Ham is the "do everything" player on the Vikings’ offense. He can take on a violent block, run the ball up the middle, even catch a pass like a tight end or line up as a receiver to give a defense a different look.

"He’s smart enough to handle all that stuff, he’s been one of my favorite players to be around," O’Connell said.

Lewis Cine, the Vikings’ No. 32 overall pick, might be the newest example of versatility for the Vikings’ defense. He’ll play alongside Harrison Smith, and has the instincts to defend in pass coverage but also come up to stop the run. He'll likely be a pivotal piece of a new 3-4 defense run by Ed Donatell.

His film showed as much.

"I think instincts are a person’s ability to take information and quickly tell their body what to do about it. Certain people come out of the crib and just can do it," Adofo-Mensah said.

The Vikings drafted Clemson defensive back Andrew Booth Jr. in the second round and Akayleb Evans out of Missouri in the fourth round, seeking more impact players in the secondary to go with Patrick Peterson, Chandon Sullivan, Cam Dantzler and Kris Boyd.

O’Connell said he’ll be watching the rookie defensive backs throughout the offseason to see how they limit big plays without drawing pass interference penalties.

Adofo-Mensah said he has to do a "pallet cleanse" when he evaluates college defensive backs to give himself a fresh mindset.

"It’s all so grabby. That’s also an element where you have to adjust your eyes to what they’re allowed to do at that level and kind of do it from there," Adofo-Mensah said.

They also showed film of Ed Ingram playing left guard at LSU. He had the ability to give help on a pass rusher, then leave an assignment to take on a free rusher. Ingram, a second round pick, could compete for a starting job on the offensive line.

They won’t truly know what they have until they see it on the field live, but Adofo-Mensah and O’Connell feel good about their first draft class in their new roles.