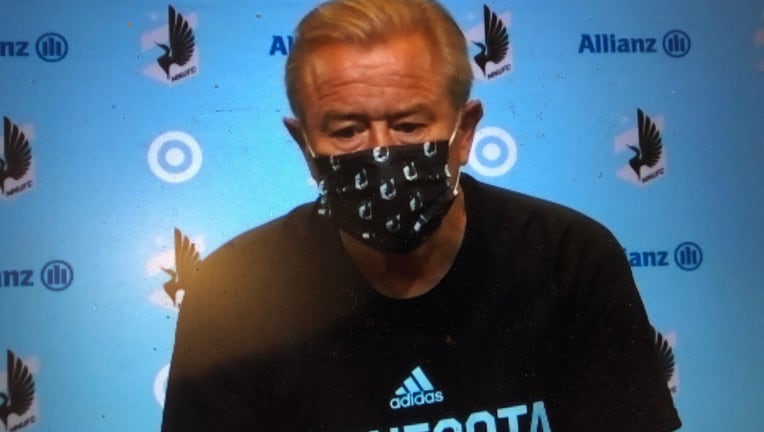 MINNEAPOLIS - Adrian Heath says Minnesota United has yet to play its best game at the MLS is Back Tournament. That said, the Loons control their destiny to advance to the knockout stage in the tournament.

They followed that by playing to a 0-0 tie against Real Salt Lake in match that started late Friday night and ended early Saturday morning. They had one great scoring chance in each half. Aaron Schoenfeld hit a post, then Ethan Finlay’s rebound header was saved. In the second half, Robin Lod had a shot saved on a mini-breakaway.

With one game to play, the Loons and Real Salt Lake are tied in Group D with four points each.

“Obviously we’ve taken four points, which we would’ve probably taken before we got here. It looks like we’re going to go through, if that’s the case, it becomes tournament futbol and we know in tournament futbol, anything can happen. I know what this team is capable of, we probably haven’t quite got there since the break,” Heath said Tuesday.

Minnesota United should also be healthier heading into Wednesday night’s game. Luis Amarilla had been dealing with a groin injury, and Mason Toye has been battling a hip injury. Both have been full participants in training and are in the selection for Wednesday.

Heath said Kevin Molino will be a game day decision due to a hamstring strain.

The Loons will face a Colorado Rapids squad that has lost its first two matches of the MLS is Back Tournament and is not likely to advance. They’ve scored two goals in two games, and allowed five. But, they played Sporting KC to a one-goal game down to nine players.

A win Wednesday night gives Minnesota United seven points over three games at the MLS is Back Tournament. It also would give them 13 points over the first five games of the MLS regular season. It’s a big game for the Loons, who currently lead the Western Conference at 3-0-1 and 10 points. Every point matters, especially if the MLS season continues with regional play after the tournament.

Heath expects a tough game from Colorado Rapids despite their 0-2 mark.