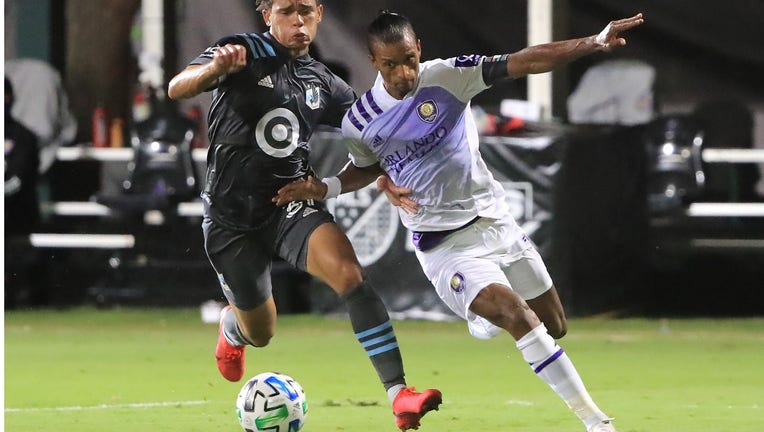 Nani #17 of Orlando City fights for the ball with Hassani Dotson #31 of Minnesota United during a semifinal match of MLS Is Back Tournament between Orlando City and Minnesota United at ESPN Wide World of Sports Complex on August 06, 2020 in Reunion, ((Photo by Sam Greenwood/Getty Images))

MINNEAPOLIS - Minnesota United has been in Orlando since late June for the MLS is Back Tournament, but they’re coming home one game short of the tournament championship.

The Loons were eliminated Thursday night after a 3-1 loss to tournament host Orlando City SC at ESPN’s Wide World of Sports. Orlando advances to face the Portland Timbers in the tournament championship next Tuesday night, with the winner earning more than $1 million in prize money and a spot in the 2021 CONCACAF Champions League.

It was Minnesota United’s only loss of the tournament. The Loons went 1-0-2 in Group D with a win over Sporting Kansas City, and ties against Real Salt Lake and Colorado Rapids to advance to the knockout stage. Minnesota United beat Columbus Crew in penalty kicks, then knocked off the San Jose Earthquakes 4-1 to advance to Thursday night’s semifinals.

"Overall, I’m really pleased with the players, proud of the players and what they’ve done over the last five weeks. It’s been a really difficult situation for the players and the staff, and everybody who has been down here. Our players have handled themselves admirably. There’s a lot of positives to come from the tournament," Loons coach Adrian Heath said after the loss.

The first came in the 35th minute after a 75-yard assist, the longest in the MLS is Back Tournament. Nani beat Hassani Dotson to the ball, then beat Tyler Miller for the goal and a 1-0 lead.

"The first goal is our fault. You can’t get beat with a 75-yard ball over the back four and then he just controls it and puts it in the net. That’s poor from our point of view," Heath said.

Seven minutes later, Nani got a pass from Jhegson Mendez and curled a shot around Miller to give Orlando a 2-0 lead that they took into the half.

"Ten minutes where we maybe weren’t mentally as checked on as we had been this whole tournament. He makes two great plays, but we feel like we get rid of those two moments where we could do maybe a little better, we’re in this game," said midfielder Ethan Finlay, who didn't get to celebrate his 30th birthday with a win. "If we get something in the first half before they get their goals, I think it’s a totally different game."

The Loons wouldn’t go away quietly. Minnesota United got a goal in the 82nd minute to get within 2-1. Kevin Molino threaded the needle on a pass to Mason Toye, who beat the Orlando keeper for a goal. Minutes later, Toye received a cross that if he can get a clean header on it, the game is tied 2-2.

Orlando City SC got an insurance goal in extra time, on a breakaway in the 96th minute from Benji Michel for a 3-1 lead with the entire Minnesota United team playing in the attacking zone to try and get the tying goal.

"Any time you leave the tournament without taking away any silverware, it’s disappointing. Everybody outside of this group might have had different expectations of us, but I think we’ve gone into every game knowing we can win it," defender Michael Boxall said. "It’s very disappointing to lose, whether it’s an MLS playoff game or some Mickey Mouse Cup."

Minnesota United will return home and wait for word from Major League Soccer on when and how the league season will resume. The Loons are currently the No. 2 team in the Western Conference with 11 points, a 3-0-2 record. They earned five of those points in group stage play in Florida.

"You’ve got to give them credit, they made plays when they needed to. But I feel really good about what this group did here and what they accomplished. The disappointing feeling that we have right now in our gut isn’t the fact that we got out-played. You get to this point in this competition and you want to win it, not for the money, for the pride. We feel like we let ourselves down tonight," Finlay said. "That’s a team that I don’t think we’re afraid of by any means."