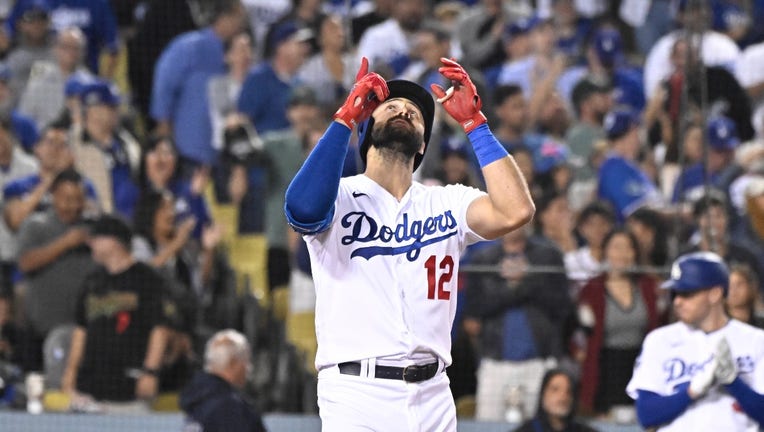 Joey Gallo #12 of the Los Angeles Dodgers points toward the sky after hitting a solo home run against the Colorado Rockies in the fifth inning of a baseball game at Dodger Stadium in Los Angeles on Tuesday, October 4, 2022.  ((Photo by Keith Birmingham/MediaNews Group/Pasadena Star-News via Getty Images))

MINNEAPOLIS - The Minnesota Twins were not able to keep shortstop Carlos Correa after he entered free agency, but they did make a couple moves last week to try and bolster the roster for the 2023 season.

Carlos Correa's time with the Minnesota Twins is over after one season. He has agreed to a 13-year, $350 million deal with the Giants.

Vazquez spent his first seven-plus seasons with the Boston Red Sox, winning a World Series in 2018. He was traded to the Houston Astros last season, where he won his second championship. He hit .276 with 23 homers and 72 RBI in 2019. Last year, he hit .282 with eight homers in 84 games with the Red Sox before moving to the Astros. He was considered one of the top catchers in free agency, behind Wilson Contreras.

The Twins have also reportedly added outfield depth, agreeing to a 1-year deal with Joey Gallo. He played 126 games last season between the New York Yankees and L.A. Dodgers, hitting 19 homers and driving in 47 runs.

Gallo will join a group of outfielders that includes Byron Buxton, Max Kepler, Alex Kirilloff, Trevor Larnach and Gilberto Celestino among others.