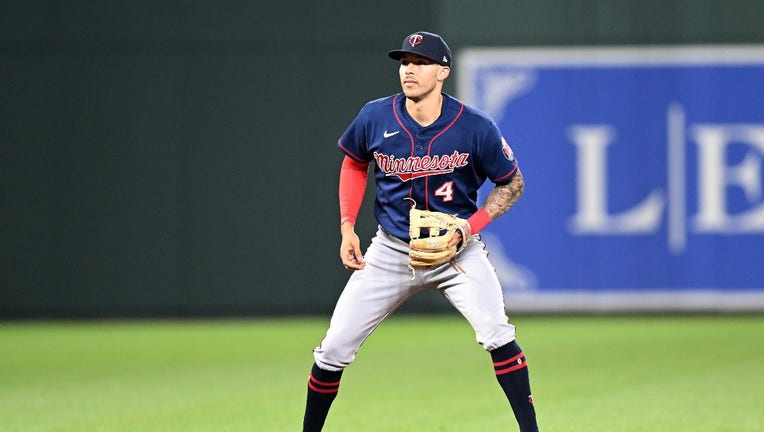 Carlos Correa #4 of the Minnesota Twins plays shortstop against the Baltimore Orioles at Oriole Park at Camden Yards on May 04, 2022 in Baltimore, Maryland.  ((Photo by G Fiume/Getty Images))

MINNEAPOLIS - The Minnesota Twins dropped their series finale 5-3 to the Baltimore Orioles Thursday night at Camden Yards, and they might be without their biggest free agent signing in franchise history for an extended time.

Carlos Correa was hit twice by pitches Thursday night, and the second one in the seventh inning knocked him out of the game. He was hit on the finger, and Nick Gordon replaced him at shortstop the rest of the night. Multiple reports coming out of the game indicate Correa has a possible fractured finger, which Twins officials will work to confirm on Friday with further testing.

Correa, who signed a three-year, $105 million deal with the Twins in free agency, was hitting .255 with two home runs, five doubles, 11 RBI and scored 12 runs in 24 games. He’s also one of the best defensive shortstops in baseball.

According to Dan Hayes with The Athletic, the Twins are expected to promote Royce Lewis from Class AAA as the team starts a nine-game home stand at Target Field Friday night against the Oakland Athletics. Lewis was the Twins’ No. 1 overall pick in 2017, and had just returned to playing with the St. Paul Saints after nearly two years off. Lewis didn’t play at all in 2020 as the COVID-19 pandemic shut down minor league baseball. Lewis missed most of 2021 with a torn ACL.

Arraez, pitcher Dylan Bundy and manager Rocco Baldelli were all unavailable Thursday night due to positive COVID-19 tests. MLB protocols state anyone who tests positive has to wait two days before undergoing another test. They then need to produce negative results on consecutive days and receive approval before returning to the team.

If the Correa news and COVID-19 issues aren’t enough, the Twins are without Miguel Sano as he’s having surgery this week for a torn meniscus in his left knee. There is no timetable for his return.

The Twins fell to 15-11 after the loss, but still have a 2.5-game lead in the American League Central Division.