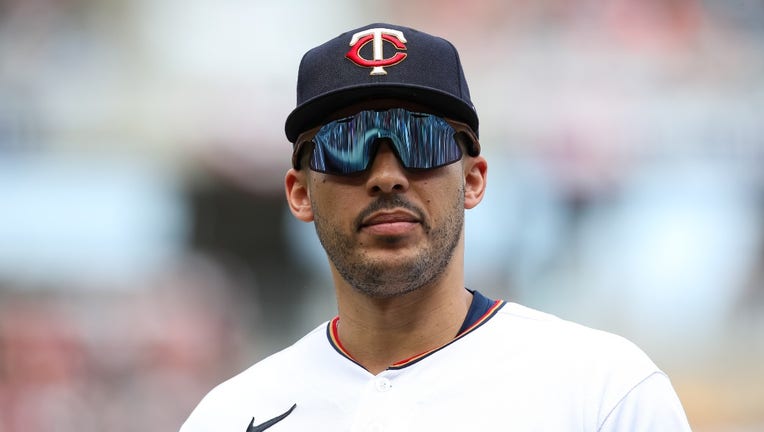 Carlos Correa #4 of the Minnesota Twins looks on against the Kansas City Royals in the fifth inning of the game at Target Field on May 28, 2022 in Minneapolis, Minnesota. The Royals defeated the Twins 7-3.  ((Photo by David Berding/Getty Images))

MINNEAPOLIS - The Minnesota Twins are in the middle of a stretch featuring eight games in seven days, and they’re without their biggest free agent signing of the offseason.

The Twins announced Tuesday morning that shortstop Carlos Correa has been placed on the COVID-19 injured list, meaning he’s tested positive for the virus. He joins starting pitcher Joe Ryan, and Gilberto Celestino on the COVID-19 list. The Twins are facing the Detroit Tigers in a doubleheader on Tuesday, and have games Wednesday and Thursday against the Tigers before a weekend series at the Toronto Blue Jays.

The Twins will be without several players for that series, between injuries and COVID-19 issues, due to Canada’s restrictions with the virus. The Twins have as many as five players who likely won’t be able to travel across the border because they are not vaccinated for COVID-19.

Correa, who signed a three-year, $105 million deal with the Twins in Spring Training, is hitting .279 with nine doubles, three homers, 17 runs scored, 16 RBI and 13 walks in 35 games. Correa missed 11 games earlier this month with a right middle finger contusion after being hit by a pitch on the hand in Baltimore.

To replace Correa, the Twins called up infielder Jermaine Palacios to make his major league debut. The Twins also placed Royce Lewis on the injured list with a bone bruise in his right knee after making a leaping catch at the wall against the Kansas City Royals. It’s the same knee in which he previously suffered a torn ACL.

The Twins are 29-20, and despite losing four of their past six games, have a 4.5-game lead on the Chicago White Sox in the American League Central Division.