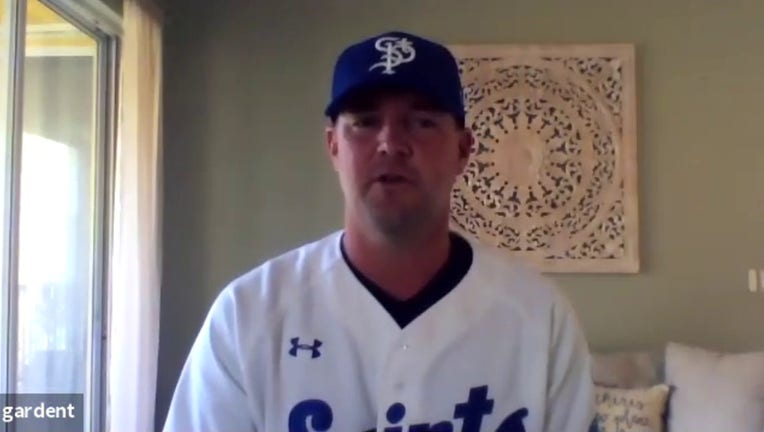 Toby Gardenhire was named the manager of the St. Paul Saints Tuesday as the team enters its first season as the Class AAA affiliate of the Minnesota Twins.

MINNEAPOLIS - There’s a new man in charge of the dugout at CHS Field when the St. Paul Saints start their 2021 season, but the name should be familiar to anyone who has followed the Minnesota Twins for the last 20-plus years.

"I couldn’t be more excited today to welcome Toby Gardenhire as the first manager of the St. Paul Saints as we enter the next chapter in our history as the AAA affiliate of the Minnesota Twins," said Derek Sharrer, the Saint’s executive vice president and general manager.

It’s a homecoming for Gardenhire. The 38-year-old grew up in the St. Paul area, went to Roseville High School and brought up memories Tuesday of playing baseball, and mostly losing, against Joe Mauer at Midway Stadium.

"I just feel very lucky to be where I’m at with the Twins’ organization. Getting a chance to come to St. Paul was just kind of icing on the cake for me. I’ve been in Minnesota most of my life," Gardenhire said.

He’s well aware of the weight his name carries in baseball. His father, Ron Gardenhire, managed the Twins from 2002 to 2014, winning six division titles.

Toby Gardenhire has spent a majority of his baseball career in the Twins’ organization in a variety of capacities. He played two seasons at Class AAA Rochester and two seasons in AA before transitioning into a coaching role. He still has memories of being the baseball coach at UW-Stout, where he maintained the field, did the laundry with uniforms and even bought them.

"You learn a lot when you’re in there doing the laundry and putting the tarp on at midnight, you’re out there raking the field in the morning. That’s the whole gamut of baseball," Toby said.

He’s also aware of the nepotism with his name. He heard the fans yelling ‘Is this bring your kid to work day?’ when he got meaningful Spring Training at-bats, or jokes that they were an early Christmas present.

Toby Gardenhire led the Twins Class AAA affiliates to a 151-121 record from 2018-19. He helped lead the Cedar Rapids Kernels to a playoff berth in 2018 after a 77-62 record. In 2019, he led the Ft. Myers Mussels to a 74-59 record, a playoff berth and earned the Florida State League Manager of the Year. He's in his sixth year coaching and/or managing in the Twins' organization.

Now, he’s in charge of developing the organization’s top prospects at CHS Field, and seeing to it that they get the chance to travel the 10 miles across the Mississippi River to play for the Twins at Target Field. He’ll have an open line of communication with Rocco Baldelli.

"We’ve got the guys that they’re going to need when they’re going down the stretch. Me and Rocco have a pretty good relationship, I think he knows he can call me any time and I’ll be able to tell him whatever he needs to know about any of his guys," Toby said.

Toby Gardenhire wrote out his first lineup card when he was 10 years old, when his dad worked for Tom Kelly. Now he’s in charge of a team that’s moving to the top level of minor league baseball after 28 years between the Northern League and the American Association.

"Not everybody gets a chance to go home and manage in their hometown, which is what I get to do so that’s a pretty cool experience," Toby said.