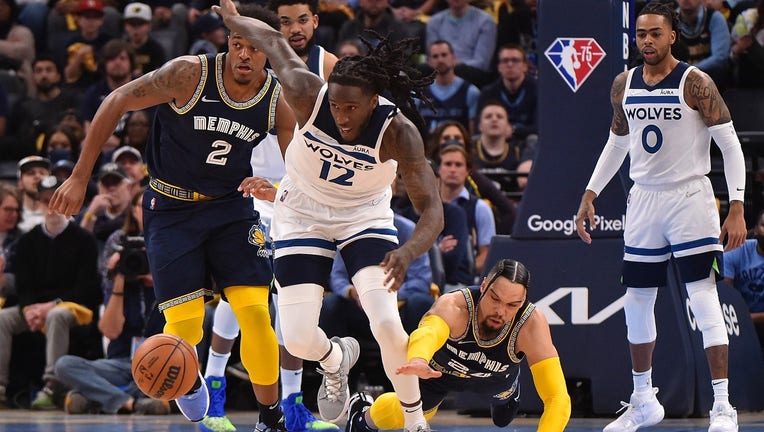 Taurean Prince #12 of the Minnesota Timberwolves and Dillon Brooks #24 of the Memphis Grizzlies fight for the ball during Game Two of the Western Conference First Round at FedExForum on April 19, 2022 in Memphis, Tennessee. ((Photo by Justin Ford/Getty Images))

MINNEAPOLIS - The Minnesota Timberwolves won’t be returning to Minneapolis with a chance to sweep the Memphis Grizzlies.

The Timberwolves struggled from the opening tip Tuesday night in Game 2, and never recovered in a 124-96 loss to the Grizzlies as their Western Conference Playoff series is tied 1-1. Not one player had a good night as the Timberwolves had a chance to win two straight road playoff games for the first time in franchise history.

Anthony Edwards led Minnesota with 20 points and six assists, but got off to a slow start offensively. Karl-Anthony Towns had 15 points and 11 rebounds, but missed his only three-point attempt of the game and struggled with foul trouble. D’Angelo Russell had 11 points, shooting 3-of-11 from the field. Taurean Prince and Naz Reid combined for 24 points off the bench.

Russell is just 5-off-22 from the field in two playoff games.

"I always talk about Timberwolves basketball, tonight wasn’t that. It shows you just how disciplined and how locked in we gotta be every single night regardless of the opponent. A small lapse in mental and you see what the game comes out to be in the playoffs," Towns said.

The Timberwolves trailed just 33-32 after one, but the sluggish quarter set the tone for the night. It featured 20 fouls between the two teams, 33 combined free throws and took nearly 45 minutes between the whistles, and two video reviews. They scored just 17 points in the second quarter.

"Really, really weird start. I kept telling our guys finding a rhythm offensively was what was key. The game never really settled into a flow for us," Finch said.

Ja Morant led the Grizzlies with 23 points, 10 assists and nine rebounds, and exited during the third quarter with an apparent hip injury before coming back in the fourth quarter. It was the Grizzlies’ depth that gave the Timberwolves problems Tuesday. Jaren Jackson Jr. and Desmond Bane scored 16 points each, while Brandon Clark, Xavier Tillman, Ziaire Williams and Tyus Jones combined for 49 points off the bench for Memphis.

The Timberwolves trailed 60-49 at the half, and Memphis started the second half on a 10-2 run to lead 70-51 and put the game away. The Grizzlies’ lead grew to 30, and Chris Finch pulled his starters midway through the fourth quarter.

The Timberwolves shot just 11-of-38 (28.9 percent) from the perimeter, were out-scored 60-34 in the paint and committed 19 turnovers in the loss. Minnesota also gave up 14 offensive rebounds. The Grizzlies shot nearly 48 percent from the field, and had 29 assists on 44 made shots. The Wolves had 16 assists on 30 made shots.

"They made shots, we didn't," Edwards said.

"There was no ball movement, really super sticky. Everybody seemed to try to want to go and solve all the problems all by themselves. We haven’t really done that for a long, long time," Finch said.

The Timberwolves host the Grizzlies for Game 3 Thursday night in Minnesota’s first home playoff game since 2018. They got a road win, and now come back home with a chance to take control of the series at Target Center.

"I’m not worried. I hope my teammates aren’t worried. We’re going back to Minnesota. They got to come to our house and play us twice at the crib. And our crowd, I’ll put our crowd up there with the best of them. It’s their problem to deal with," Edwards said.