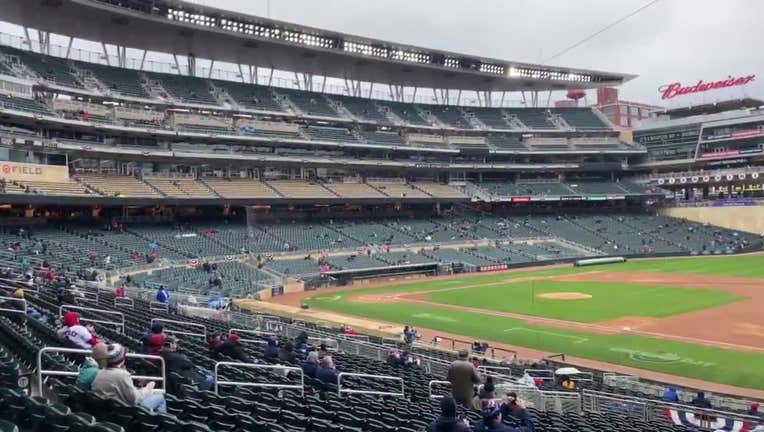 MINNEAPOLIS - Minnesota sports are back in action on Tuesday after taking a pause Monday following the fatal police shooting of Daunte Wright on Sunday in Brooklyn Center.

The Minnesota Twins, Timberwolves and Wild all decided to postpone their Monday games out of respect for Wright’s family, and in an abundance of caution with fears of more civil unrest. Minneapolis, St. Paul and several other Twin Cities communities were under a curfew that started Monday night and was lifted Tuesday morning. It didn’t stop hundreds of demonstrators from rallying outside the Brooklyn Center Police Department.

The Twins will play on Tuesday, a 1:10 p.m. game against the Boston Red Sox at Target Field. The two teams will make up Monday’s game on Wednesday, and it will be a doubleheader featuring two seven-inning games.

The Minnesota Timberwolves will host the Brooklyn Nets at 3 p.m. Tuesday at Target Center, but the game will be played without fans. Those who had tickets for Monday’s game will get a full refund, and should contact the Timberwolves’ ticket office.

Under state COVID-19 guidelines, the Wolves can have up to 3,000 fans at Target Center. The team also welcomed Alex Rodriguez and former Walmart CEO Mark Lore to Minneapolis on Monday. The two are in talks to buy the Timberwolves from Glen Taylor, and were in town to watch the team play the Nets before Monday’s game was postponed. They talked with Wolves’ players and front office staff, and met with Lynx coach and general manager Cheryl Reeve. They also got a tour of Mayo Clinic Square.

The Minnesota Wild postponed Monday’s game against the St. Louis Blues at Xcel Energy Center, and it’s been rescheduled for May 12.

The Wild next host the Arizona Coyotes at 1 p.m. Wednesday at Xcel Energy Center, which starts a stretch of three games in four nights as the San Jose Sharks come to St. Paul Friday and Saturday night.