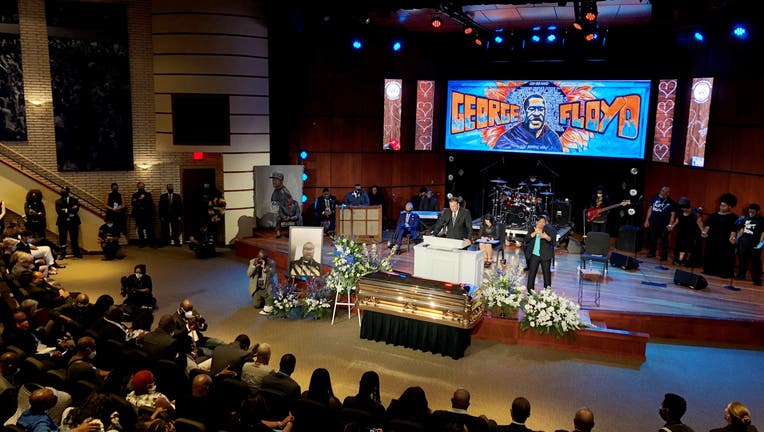 The remains of George Floyd are seen during a memorial service in his honor on June 4, 2020, at North Central University's Frank J. Lindquist Sanctuary in Minneapolis, Minnesota. - On May 25, 2020, Floyd, a 46-year-old black man suspected of passing

MINNEAPOLIS - The life of George Floyd was honored Thursday at a memorial service on Thursday at North Central University in Minneapolis.

Here is a link to Fox 9's full coverage of the event.

Okogie has bee among the most active Minnesota athletes on social media reacting to Floyd's death. He told NBA TV earlier this week, "It shouldn't take a video. It shouldn't take outrage to see justice."

Floyd died on Memorial Day in an officer-involved incident outside Cup Foods at 38th and Chicago in south Minneapolis.

The Minneapolis Police Department had four officers responding to a report of a forgery in progress. A man matching the suspect description, later identified as Floyd, reportedly was “under the influence” and tried to buy cigarettes with a counterfeit $20 bill. Floyd was in handcuffs and unarmed when he was restrained by officer Derek Chauvin with his knee to Floyd’s neck. Floyd pleaded for help, screaming “I can’t breathe” until he lost consciousness. He was taken to Hennepin County Medical Center, where he was pronounced dead a short time later.

In the aftermath of Floyd’s death, there have been several protests, both peaceful and violent, as tensions rise between the community and Minneapolis police. Rioters took over the Third Precinct, setting several fires inside after officers and employees abandoned the building.

Several south Minneapolis business have suffered extensive damage or been destroyed by violent protesters, many that are minority business owners. Rudolph and Okogie are scheduled to host a food and supply drive on Friday at the Target that was one of the first stores to suffer extensive damage due to protesters and looting.