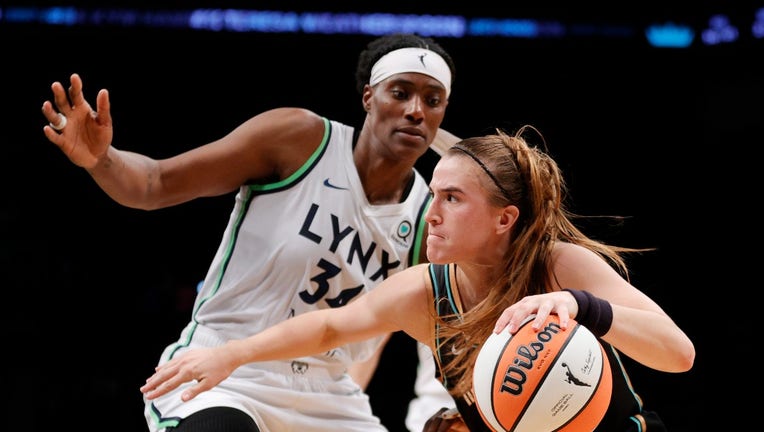 Sabrina Ionescu #20 of the New York Liberty dribbles as center Sylvia Fowles #34 of the Minnesota Lynx defends during the second half at Barclays Center on June 07, 2022 in the Brooklyn borough of New York City. The Liberty won 88-69. ((Photo by Sarah Stier/Getty Images))

MINNEAPOLIS - It hasn’t been the send-off season Sylvia Fowles had in mind with the Minnesota Lynx, and she was dealt some difficult news on Thursday.

The Lynx announced that after an MRI taken at Mayo Clinic in Minneapolis, Fowles has a cartilage injury in her right knee. She is out indefinitely, and there is no timetable for her return.

Fowles was injured during Tuesday’s 88-69 loss to the New York Liberty. She’s in her 15th and final WNBA season, as she has already announced she’s retiring after this season. In 12 games with the Lynx this year, Fowles is averaging 16.5 points, 10.3 rebounds, one assist, 1.5 steals and 1.3 blocks per game.

The Lynx started the season 0-4 and have lost six of their first seven games. The Lynx fell to 3-9 after Tuesday’s loss at the Liberty, and are now 11th in the WNBA. The Lynx next host the Washington Mystics Friday night at Target Center.