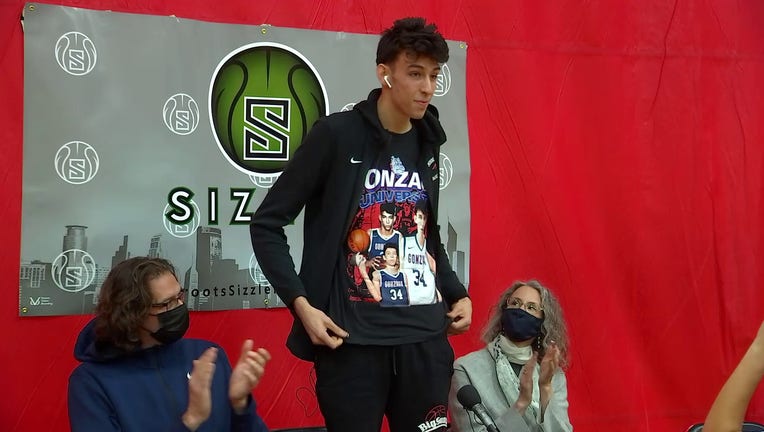 MINNEAPOLIS - Minnehaha Academy star center Chet Holmgren, the No. 1 overall recruit in the class of 2021, made his college choice official on Monday.

Using the national platform on ESPN’s SportsCenter, Holmgren announced his commitment to play basketball next season at Gonzaga. Holmgren was recently named Mr. Basketball, was the Metro Player of the Year and is a McDonald’s All-American. He averaged more than 21 points and 12 rebounds per game this past season, and helped lead the Redhawks to a Class AAA state title after beating Alexandria 80-29 in the state title game.

Holmgren’s final seven schools included Gonzaga, Minnesota, Michigan, North Carolina, Memphis and Ohio State. His decision Monday ends a whirlwind process for the nation’s top recruit. He made the news official in front of about 200 friends and family in the gymnasium at Minnehaha Academy.

Holmgren made a name for himself national a few years ago at a camp hosted by Steph Curry. He beat Curry off the dribble and went in for a dunk, and video of the play went viral on social media.

Holmgren took a visit to Gonzaga with friend and former teammate Jalen Suggs before the COVID-19 pandemic hit. Suggs just finished his freshman season at Gonzaga, helping lead the Zags on an undefeated run to the national championship game before losing to Baylor.

"How close I am with Jalen and him going there definitely played a part in it. Being able to speak to somebody that I’ve known for so long and trust about it was definitely a big part," Holmgren told ESPN. "But also the way I see myself fitting in, not only with the coaches, the players, the system, the school. But being able to look back and see people with skill sets similar to mine and how they used them. It was a pretty hard offer not to take them up on."

Minnesota keeps churning out top talent every year, and it's putting the top programs in the nation on notice. Since 2014, Minnesota has had five 5-star high school recruits. Tyus Jones, Tre Jones and Matthew Hurt all went to Duke, and now Holmgren joins Suggs in choosing Gonzaga.

Holmgren is projected to be a top pick in the 2022 NBA Draft, and he opted to attend college rather than spend a year in the NBA’s G League.

Hours after Holmgren's announcement, Suggs made it official that he's declaring for the 2021 NBA Draft. In one season at Gonzaga, Suggs played in 30 games, averaging 14.4 points, 5.3 rebounds and 4.5 assists and 1.9 steals per game while playing about 30 minutes per game.

Suggs is a projected top-five pick in the NBA Draft.