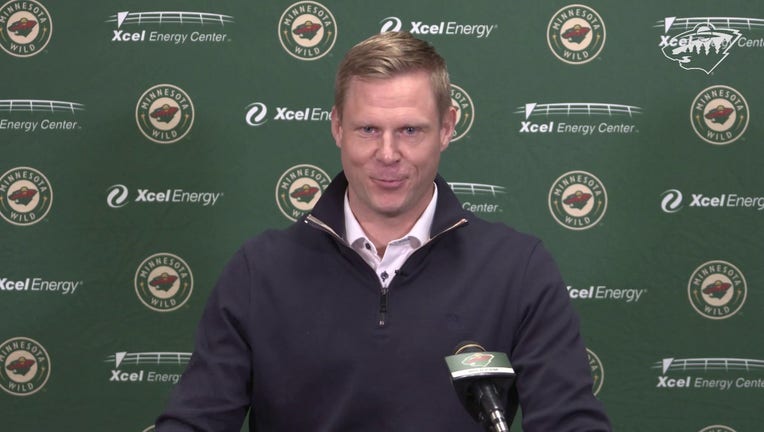 Former Minnesota Wild captain Mikko Koivu talked Tuesday about having his No. 9 jersey, the first in franchise history, retired in March.

MINNEAPOLIS - Former Minnnesota Wild captain Mikko Koivu talked with reporters on Tuesday at Xcel Energy Center, less than 24 hours after it became official the team is retiring his No. 9 jersey.

Koivu will be the first in franchise history to have his jersey retired. He admitted Tuesday he’s known about it for months, after having lunch back in the summer with Wild owner Craig Leipold. Koivu will have the No. 9 retired during a pregame ceremony on March 13 before the Wild host the Nashville Predators.

Koivu played for the Wild for 15 seasons, and was a captain for 11 of them.

"Obviously it means a lot, a big honor. Yesterday when they announced it, you’re starting to think back on all the years and the people and the fans. It means a lot, I’m proud of it, proud to be part of the Wild, always have been," Koivu said.

Wild management opted not to bring Koivu back for the 2020-21 season. He signed as a free agent with the Columbus Blue Jacket, and played in just seven games before announcing his retirement.

"When I made my decision to retire, I really did feel that I gave it all and I can’t get to the level that I wanted to be where I really enjoyed the game. I’m happy with the career and with my decision," Koivu said. "As an athlete and as a hockey player, if you get a chance to retire on your own terms and you get the feeling that I gave it all that I have, that was something that I always wanted to be able to do. I’m very grateful for that."

"No one worked harder than Mikko during his time with the Minnesota Wild," Wild GM Bill Guerin said Monday. "He was a fiery competitor and a fantastic captain both on and off the ice. Mikko is the franchise leader in so many categories, but the impact he made in our community and the connections he made with Wild fans, will live on forever."

The Wild drafted Koivu with the No. 6 overall pick in the 2001 NHL Draft. He has no idea what to expect when his jersey is retired in March, and still misses the locker room and the daily routine of being an athlete. He said it was important to him to spend a majority of his NHL career with one team.

"To get an opportunity to play for one team for as long as I did, I think it’s something that I valued a lot. It became home for me," Koivu said.

He has no plans to step away from hockey completely. Koivu has been offered opportunities to work within the Wild front office. He’s currently on the coaching staff for Team Finland as it gets ready for the World Junior Championships.

He says he’s not sure if his hockey future involves being a coach, a scout or in the front office. He’s not ready to go all-in on that yet. But he is grateful to get one last day with the Wild and fans, and get one final look at his No. 9 jersey that won’t be worn again.

"I look at it as you get one more chance to say thank you and for the fans, but also for the people that helped me a lot throughout my career," Koivu said.