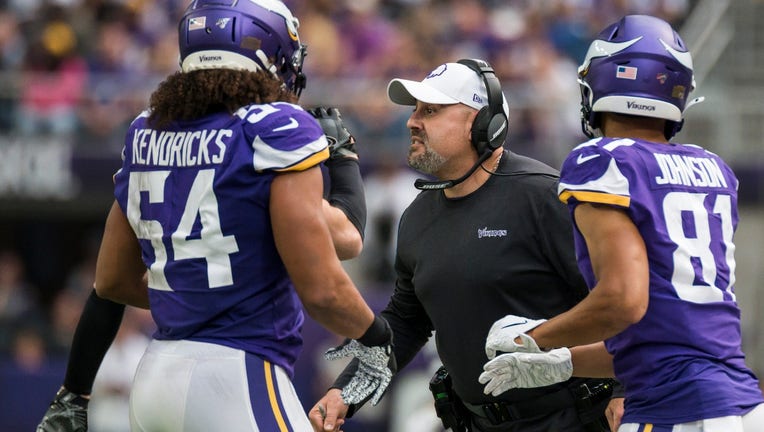 Minnesota Vikings special teams coordinator Marwan Maalouf speaks with his players on the sideline in the first quarter of the game against the Oakland Raiders at U.S. Bank Stadium on September 22, 2019 in Minneapolis, Minnesota. ((Photo by Stephen Maturen/Getty Images))

MINNEAPOLIS - The Minnesota Vikings struggled all season with their special teams unit, and coach Mike Zimmer confirmed Tuesday that Marwan Maalouf will not return as a result.

Maalouf took over as special teams coach in 2018, after Mike Priefer left the Vikings for the same position with the Cleveland Browns. Zimmer said Maalouf’s contract has expired, and it will not be renewed.

The Vikings struggled in every phase of special teams throughout the season. They gave up a kick return for a touchdown against Cordarrelle Patterson. K.J. Osborn got benched as the primary punt returner multiple times throughout the season. Chad Beebe had a muffed punt, the Vikings let two punts of their own get blocked in the same game and they cut long snapper Austin Cutting during the season.

Kris Boyd got penalized for an illegal shift after the Vikings had converted a fake punt for what would've been a first down.

Then, they had kicker issues late in the season. Dan Bailey made 36 of 37 extra points before missing seven kicks in a two-game stretch. Bailey was 0-for-3 on field goals and missed an extra point at Tampa Bay. That’s after missing two extra points and a field goal against Jacksoville, leading to questions on if Bailey would be cut.

Bailey made just 15 field goals on the season, and 68 percent of his field goals. He was 37-of-43 on extra points.

"We obviously didn’t play very well. A lot of those guys that probably should’ve been playing on special teams were playing on defense, but we’re going to shore up that area and that will be a major emphasis as well," Zimmer said.