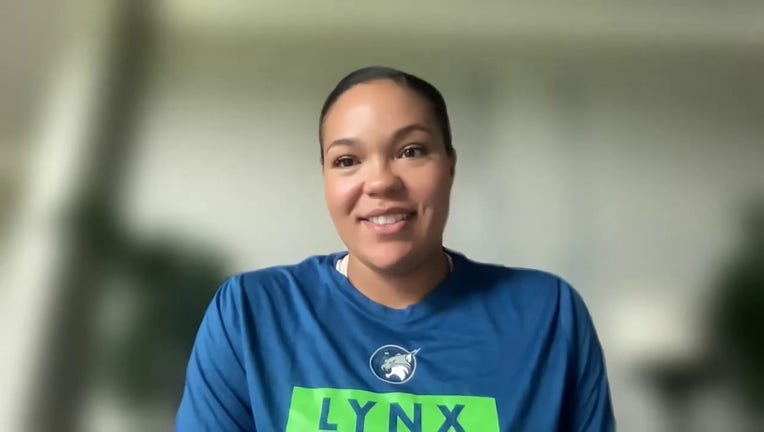 Napheesa Collier hopes to return to the Minnesota Lynx by the end of the WNBA season after having her first child later this month.

MINNEAPOLIS - Napheesa Collier would love nothing more than to be going through training camp with her Minnesota Lynx teammates and getting ready for Friday’s regular season opener at Seattle, but she’s currently preparing for a more important job.

She’s about to be a first-time mother. Collier is expecting her first child, a baby girl, later this month. On Tuesday, Collier and Lynx coach/general manager Cheryl Reeve spoke with reporters as the team announced on Monday Collier has signed a multi-year contract extension to stay with the Lynx.

"I have so much faith in Cheryl and what our team can do. I know how bright our future is, so Minnesota is home. It’s the best organization for a reason. I’m so excited to get back on the court and cheer on the team until I do," Collier said.

The Lynx took Collier with the No. 6 overall pick in 2019, and she’s been one of the most consistent players since. A 6-1 forward, Collier started all 29 games for the Lynx last season and led the team with 16.2 points, 6.6 rebounds, 3.2 assists, 1.3 steals and 1.3 blocks per game. She led the WNBA in minutes played for the third straight season, at 34.6 minutes per game.

Collier was named the WNBA Rookie of the Year in 2019 after averaging 13.1 points, 6.6 rebounds and 2.6 assists per game in her first professional season. She was the fifth player in Lynx history to start every game as a rookie and set a franchise record for minutes played.

"She gave us the opportunity to continue as a franchise aspiring to championships. However we get here at No. 6, call it whatever you want to call it, we’re glad it happened. We’re excited to make Phee a cornerstone piece to our franchise moving forward," Reeve said.

Collier is expected to miss most of the 2022 season after having her first child. The Lynx’s regular season finale is scheduled for Aug. 12, about three months after her due date. She could return to the court if the Lynx make the WNBA Playoffs.

Collier isn’t ruling out anything, especially the chance to be on the court with Sylvia Fowles in her final pro season.

"I’m going to try everything that I can to come back and be able to play with Syl. I would love to, especially for her last year. I miss playing, I want to be back on the court so I’m trying to prepare my body and I’m going do everything afterwards to prepare my body to be able to do that," Collier said. "She’s one of the most amazing people, they call her Mama Syl for a reason. Even though this is her last year, she’s going to be a permanent fixture in my life."

The Lynx have been to the WNBA Playoffs 10 straight times, and are looking for their first title since 2017. The future of the organization centers around Collier after extending her rookie contract.

"I’m really looking forward to the future and to help continue to build the Lynx as an organization," Collier said.