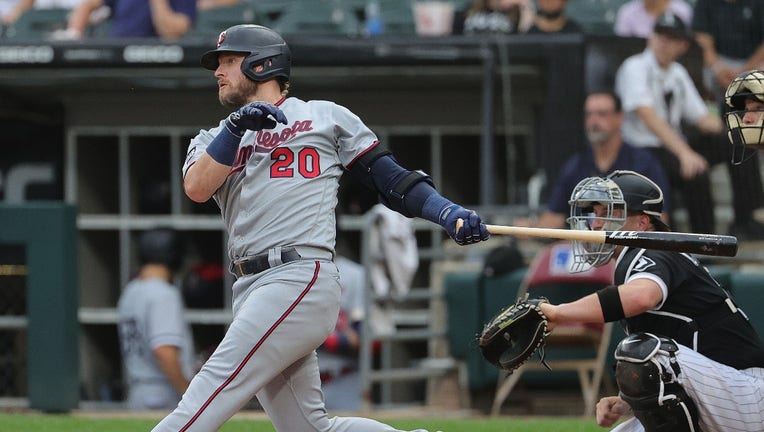 Josh Donaldson #20 of the Minnesota Twins hits a two run home run in the 1st inning against the Chicago White Sox at Guaranteed Rate Field on June 29, 2021 in Chicago, Illinois.  ((Photo by Jonathan Daniel/Getty Images))

MINNEAPOLIS - The Minnesota Twins fell to 33-44 after a 7-6 loss to the Chicago White Sox Tuesday night, but the talk after the game centered around Josh Donaldson and Lucas Giolito.

Donaldson launched a Giolito fast ball into the left field bleachers to give the Twins a 2-0 lead over the White Sox in the first inning. As he crossed home plate, microphones picked up Donaldson saying, "It’s not sticky anymore."

Donaldson has been one of the vocal leaders the last several weeks in calling out pitchers using foreign substances on baseballs to change spin rate. He recently called out New York Yankees pitcher Gerrit Cole, then promptly went 0-for-3 against him with a pair of strikeouts. Cole gave him an extra stare after each strikeout.

Accusations across Major League Baseball are forcing umpires to check pitchers for substances between innings during games. Max Scherzer was checked multiple times in a game against the Yankees, and was hot at Joe Girardi as a result. That same night, Sergio Romo nearly dropped his pants between innings while an umpire checked him for substances.

After Wednesday’s White Sox win, Giolito made it very clear what he thought of Donaldson’s words as he crossed home plate.

"He’s a (expletive) pest. That’s kind of a classless move. If you’re going to talk (expletive), say it to my face. We won, the ‘W’ is next to my name. They’re in last place."

Donaldson spoke with reporters before Wednesday night's game and said his piece. He said he spoke with Giolito in the parking lot at Guaranteed Rate Field after the game.

Donaldson added, "He said he thought it was annoying. I said, 'So what? I'm on the opposing team. What do you care about me? I'm in your face, what do you have to say about that?' And he didn't have a response."

Giolito went six innings for the White Sox, while Kenta Maeda struggled with a season-high five walks, unable to finish the fifth inning.

We’re nearly at the halfway point of the MLB season, and the Twins are 12.5 games behind the White Sox in the American League Central Division. They’re also 12 games out of a Wild Card spot, and likely sellers at the July 31 MLB trade deadline.