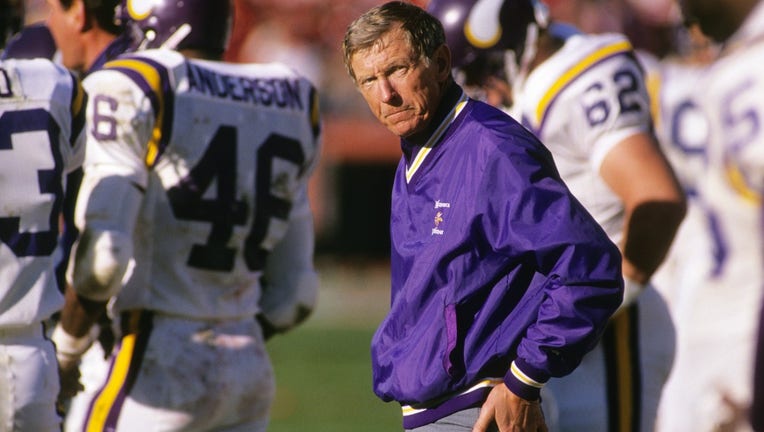 Head coach Jerry Burns of the Minnesota Vikings looks on during the 1988 NFC Divisional Playoffs against the San Francisco 49ers at Candlestick Park on January 1, 1989 in San Francisco, California. The 49ers won 34-9.  ((Photo by George Rose/Getty Images))

MINNEAPOLIS - The Minnesota Vikings announced on Wednesday that legendary former coach Jerry Burns has died. He was 94 years old.

Burns served as the Vikings’ offensive coordinator from 1968-1985, and was the head coach from 1986-1991. The Vikings went to the playoffs 15 times in his 24 seasons as a coordinator or head coach. Vikings’ owners Zygi and Mark Wilf released a statement after Burns’ death.

"Jerry Burns was one of the most important people we met when we came to Minnesota and he was a foundation of this franchise. His leadership as a coordinator and coach for over two decades shaped some of the most successful teams in Vikings history. His love of life, quick smile and sense of humor were what we will remember most and join Vikings fans worldwide in sending our prayers to his family," the statement reads.

Burns was 52-43 in the regular season as the Vikings' head coach over six seasons, and helped lead the franchise to three playoff wins. He was an assistant coach with the Green Bay Packers under Vince Lombardi for two seasons before Lombardi retired, and Grant hired Burns to be his offensive coordinator with the Vikings.

During Burns' time as offensive coordinator, the Vikings made the playoffs 12 times, won 11 division titles and appeared in all four of the franchise's Super Bowls.

Burns retired from coaching after the Vikings finished 8-8 in 1991. Burns is in the Vikings Ring of Honor.