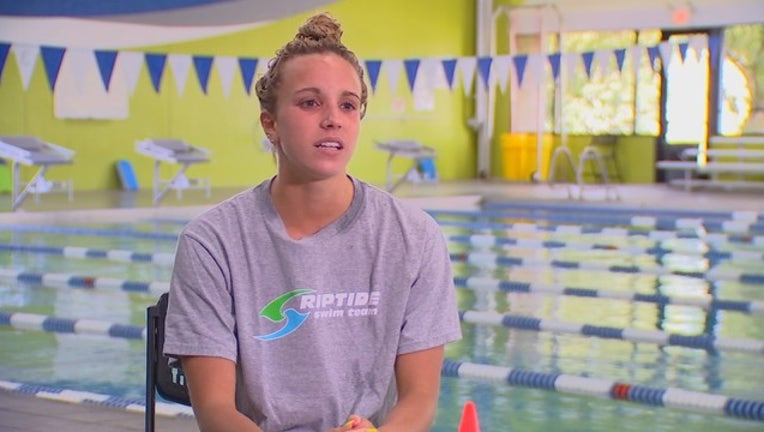 Regan shattered the previous record, set by Missy Franklin in 2012, by .71 seconds with a total time of 2 minutes 3.35 seconds.

“The first thing I thought was that there was a malfunction and the time was incorrect,” Regan said.

There wasn’t a malfunction. The stadium in South Korea was cheering on as Regan realized what she had just accomplished.

“I just didn’t believe it for a really long time. I was kind of in shock. It was tunnel vision. It was really loud in that stadium, and I was, not confused, but I was really overwhelmed. I was like ‘what? I don’t believe this what’s going on,’ and then after 30 seconds I was like, that really happened. It’s not fake. I really did that,” Regan said.

She said shortly after, Missy Franklin reached out to her and congratulated her.

“That meant the world,” Regan said.

A 17-year-old girl with the focus of an elite athlete. Regan has basically lived in the water since she was 7 years old, when she joined a swim team after watching her sister take up the sport.

“Honestly, right away it came kind of easy to me. Doing the strokes, it felt really good and really smooth and I was having a blast. I wouldn’t do it if I wasn’t enjoying it. I loved it first of all,” Regan said.

That love grew into a passion as Regan started to seriously pursue swimming and joined the Riptide Swim Team in Apple Valley. She says she never put too much pressure on herself to become a world-class swimmer. She said she stayed with swimming and kept pushing herself in the sport for one reason: she was having fun.

“I never got into the sport thinking like ‘I need to break a world record.’ That was never the ultimate goal. It was just like, to see where I can go with it and I did and that’s amazing that I did, but that’s not the ultimate [goal]. It’s just to do something fun with my life and not take a normal path,” Regan said.

She says keeping the pressure off of herself and sticking to a practice regimen that still felt fun is what has shaped her into a world record-holder. She says another key factor is her discipline.

“I just feel like my mindset has been a lot different than my peers in high school at least and I’m lucky because I don’t think I would have gotten to the point where I’m at if I didn’t have that mindset,” Regan said.

Her commitment to swimming has prevented her, in some ways, from being a normal teenager. She does some of her coursework online, her practice schedule forces her to miss events and she has been traveling the world to compete among the best athletes in the sport.

Who is she? A hyper focused athlete with an outlook on sports that keeps her grounded and genuinely motivated.

“To a certain extent, I really do think I was just born to take this path just because of my body type and what I’m thinking in my mind all the time,” Regan said.

She says she’s hoping to keep that mindset as she prepares for the summer 2020 Olympic qualifiers in June.

“Although I know I’m in a really good place and I’m feeling great, I can’t forget that there are hundreds of other girls behind me who are amazing and talented and can take that spot in a second, so that’s what keeps me going every day at practice,” Regan said.

She says she doesn’t plan on making any major changes to her training as she gets ready for the qualifiers. She says what she’s been doing has been working for her and is keeping her love for the sport afloat.

Regan says since breaking the record, she’s been getting a lot of attention in the sports world. She says she understands that there are a lot of people watching her success and that inspires her to keep improving.

“I want to do it for these people and for them to be proud of me and be proud of a local Lakeville girl,” Regan said.

After Regan graduated from Lakeville North in June, she plans to swim at Stanford University.