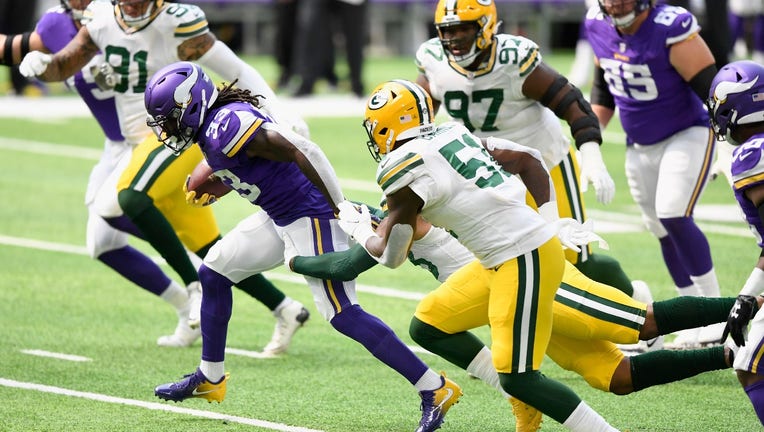 Dalvin Cook #33 of the Minnesota Vikings carries the ball against the Green Bay Packers during the first quarter of the game at U.S. Bank Stadium on September 13, 2020 in Minneapolis, Minnesota. ((Photo by Hannah Foslien/Getty Images))

MINNEAPOLIS - The Minnesota Vikings are 0-2, the offense is having trouble staying on the field and offensive coordinator Gary Kubiak is taking it personally.

“I’m focused on myself. Hell, I’ve got to do a lot better job for the guys and getting them in position,” Kubiak said Thursday.

The truth is in the numbers. In Minnesota’s Week 1 loss to Green Bay, the Vikings ran just 49 offensive plays, 17 in the first half. They had the ball for 18 minutes, 44 seconds, the least amount of time of possession in NFL history since the stat started getting tracked in 1977.

Dalvin Cook, fresh off a multi-year extension, had 12 carries for 50 yards. Sure, he had two touchdowns, but the second came with the game decided. Last week, 14 carries for 63 yards with another garbage-time touchdown. They had the ball for a little more than 38 minutes, and ran 47 offensive plays.

An offense whose mission is to be physical, run the ball and use that to set up big passing plays has given Cook 26 carries for 113 yards in two games. Getting behind in games has attributed to that, but the run game isn’t where it needs to be.

“We just haven’t run it enough. That’s what we’ve got to get back to, we’ve got to figure out a way to stay on the field,” Kubiak said.

Kubiak’s other mission is to get Kirk Cousins going. Against the Packers, Cousins threw for 259 yards, two touchdowns and an interception. The yards piled up as the Packers extended their lead, forcing the Vikings to throw downfield.

Last week was one of the worst games of Cousins’ career as a starter. He was 11-of-26 passing for 113 yards and three interceptions. He had a 0.0 rating at one point in the second half, and finished with a 15.9 rating, the worst of his career. He took a safety for the second straight game.

He didn’t have much to say after watching the film.

“I’ve got to find some room for him. He had some plays last week where he had no place to go with the ball. I’ve got to get people open,” Kubiak said. “I take it personal that I’ve got to help him more and I know his teammates do as well.”

Thielen didn’t offer many answers for the Vikings’ early offensive struggles, only to say that he’s focused on doing his job.

“I think it just comes down to just going out there and playing ball and having fun. When he gives me a chance, I need to do a better job of making something happen. There’s really no excuses, it’s just when the ball is in the air you’ve got to go make a play,” Thielen said. “That’s why it’s the greatest team game there is, you need all 11 to do their job and to make plays that aren’t just average plays.”

They need to make more plays, and their offense is predicated on running the ball. Kubiak said ideally the offense would be on the field for 70-75 plays when things are going well.

“That’s a point of emphasis, and to do that, you’ve just got to play better. I’ve got to coach better,” Kubiak said.

Thielen said the best thing about an NFL season is moving on from a loss and getting back on the field.

They collectively need to improve on a lot, but the first guy pointing the finger at himself is Kubiak.

“That’s my job to go get that done. We’ve got to play better collectively, and that starts with me helping them out,” Kubiak said.