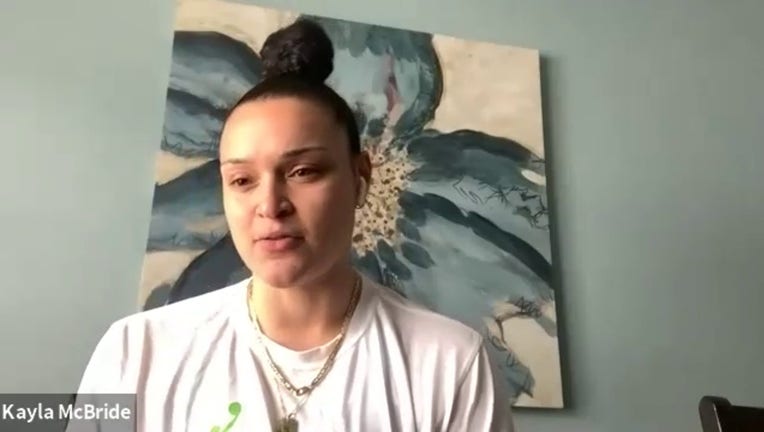 Kayla McBride spoke with the media on Tuesday for the first time since signing with the Minnesota Lynx in WNBA free agency.

MINNEAPOLIS - Kayla McBride considers herself the ultimate competitor who wants to win a championship and take her game to the next level.

The Minnesota Lynx is a franchise with a proud tradition, having made the WNBA Playoffs 10 straight years, with four championships to show for it. But the recent sledding has been more difficult since Maya Moore stepped away from basketball to pursue social justice causes.

Kayla McBride considers herself the ultimate competitor who wants to win a championship and take her game to the next level.

Enter McBride, one of the top free agent guards on the market. One of the first people she heard from when the search started for a new team? Lynx Coach and General Manager Cheryl Reeve. McBride agreed to terms to join the Lynx late last week, and the signing became official on Monday. She was introduced virtually on Tuesday as the newest member of the Lynx.

As Reeve puts it, the timing was perfect.

"We’ve wanted Kayla for a while. Timing is everything, and this was the right time for us to be together," Reeve told reporters via Zoom on Tuesday. "The timing is perfect for us for her to come here and be such a big part of what we’re trying to get done."

What appealed the most to McBride about coming to Minnesota? Her answer was simple: They win a lot.

"They come with the amount of respect across the league and what they’ve been able to do over the last 10 years has been unreal. They created a dynasty," McBride said. Being a young player and having to play against those teams, you could feel it. Automatically as a competitor, you want to be a part of a winning team. It was kind of a no-brainer."

McBride’s basketball resume speaks for itself with what she can add to the Lynx. She’s a three-time WNBA All-Star and has spent the last seven years with the San Antonio Stars and Las Vegas Aces.

What stands out to Reeve most about McBride? Her competitive nature.

"Hates to lose. I do well with people that don’t like to lose a drill, don’t like to lose a shooting game. Those people are highly successful in this league. Give me with a passion to play the game, the knowledge to know they have to improve every year and a will to win. Those are some really big things," Reeve said.

McBride will join a backcourt that already includes Crystal Dangerfield, Odyssey Sims, Rachel Banham and Lexie Brown. She’ll also be teammates with a future hall-of-fame player in Sylvia Fowles. She feels it’s the right mix to help bring a championship back to Minnesota, and it’s something she craves.

"First and foremost it’s about championships, I don’t have one in the WNBA. Being a part of an organization like this, where they breed them, that’s just an obvious thing," McBride said.

That’s been the same mission for Reeve. The Lynx haven’t won a WNBA title since 2017, and many thought their run might be over when Moore stepped away. Would the franchise slide without their star? Not if Reeve had anything to say about it.

"I was bound and determined not to let that happen. I felt really motivated by the idea that there were a lot of people rooting for the demise of the Minnesota Lynx," Reeve said. "Win a championship with a different team of players than we did it with before. That’s what it’s about."