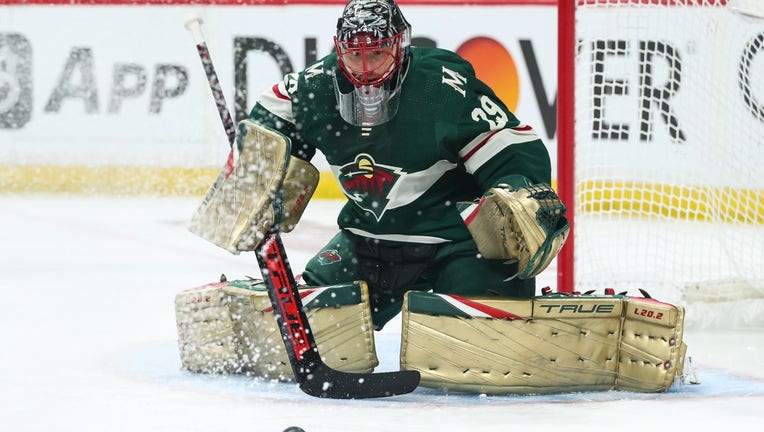 Marc-Andre Fleury #29 of the Minnesota Wild defends his net against the St. Louis Blues in the first period in Game Five of the First Round of the 2022 Stanley Cup Playoffs at Xcel Energy Center on May 10, 2022 in St Paul, Minnesota. The Blues defeat ((Photo by David Berding/Getty Images))

MINNEAPOLIS - Marc-Andre Fleury is on the tail end of his career, and the three-time Stanley Cup winner wants to go for a fourth before putting away his skates and pads.

Winning is one of the main reasons he wanted to return to the Minnesota Wild. Thursday night, the Wild announced they’ve signed Fleury, 37, to a two-year, $7 million deal. The Wild acquired Fleury before last season’s NHL trade deadline in hopes of giving the goaltending a boost to make a run in the Stanley Cup Playoffs. That run ended early with a first round loss to the St. Louis Blues and for the first time in his 18-year NHL career, Fleury was a free agent. He’s happy to be back in Minnesota.

"I like the team, I like the guys in the locker room. I like the coaches, the staff. It’s a great place to keep raising my family. It checked all the boxes for me," Fleury said. "It’s a good team too, right? I think we can still win some games and that’s very important to me."

Fleury went 9-2 in 11 regular season games with the Wild, with a 2.74 goals against average and a .913 save percentage. He then got the nod to start the playoff series over Cam Talbot against the Blues, after Talbot finished the regular season 13-0-3 in his last 16 starts. The Wild didn’t make the change to Talbot until Game 6, an elimination game.

Fleury said Friday via Zoom he’s exchanged text messages with Talbot since re-signing with the Wild. Fleury expects a near 50-50 split in goalie duties next season.

"Both me and Cam will play. I think that’s something that will make us good too. Every night we’ll have a fresh goalie in net. We’ll help each other, push each other and it will be good for the team," Fleury said. "I get along great with Cam."

It does not appear Talbot shares the same excitement with having Fleury back. He shared frustration over not playing during the series loss to the Blues until Game 6, and his agent reportedly spoke with Wild general manager Bill Guerin at the NHL Draft on Friday during the third round.

"We both stated our positions. Billy has a lot to think about," Talbot’s agent said, according to national hockey insider Pierre LeBrun.

Guerin offered a rebuttal to that Friday afternoon, via Michael Russo with The Athletic.

"I don't have s**t to do. Cam Talbot's under contract. George can say whatever the hell he wants. My team's set right now, and that's the way it goes. We can have all the discussions we want. Cam's a member of our team. We really like Cam. All we're trying to do is win," Guerin said.

Guerin made it clear after the season they wanted both Fleury and Talbot back for this season.

"It’s really not that big of a deal. There’s no controversy, there’s no drama. We like both goalies, we like both people. We want them both back," Guerin said after the season. "We think we can be successful with both of them, that’s just it."

"When we made the decision, Marc-Andre Fleury had three Stanley Cups. That tipped the scale, that was the decision. We try to make the most intelligent decision for our hockey club and for the team. There’s no controversy here," Wild coach Dean Evason said after the season.

We’ll wait and see what that means for Talbot’s future in Minnesota. He’s under contract this season for about $3 million.