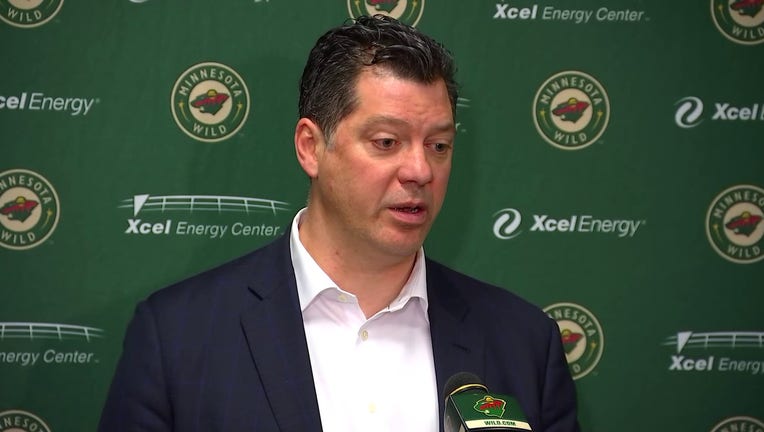 Wild General Manager Bill Guerin spoke Tuesday about the trade of Jason Zucker to the Pittsburgh Penguins before the Wild's 4-0 win over the Vegas Golden Knights.

The trade of fan-favorite Jason Zucker to the Pittsburgh Penguins Monday night isn’t a white flag on the season, and he may not be the last player dealt before the Feb. 24 deadline. Guerin, in his first season as general manager, also fully expects his team to compete for a playoff spot with 26 games to play.

"I can promise you this: If there is quit, there will be more trades," Guerin said. "I wholeheartedly expect this team to compete for a playoff spot. We're right there, and if there's any signs of anybody taking their foot off the gas, that will be an indication."

His team responded Tuesday night. The Wild scored twice in each of the first two periods against the Golden Knights, and Alex Stalock recorded a 26-save shutout as Minnesota beat Las Vegas 4-0 at Xcel Energy Center.

The Wild are 7-3 in their last 10 games, and are now just four points out of the No. 8 spot in the Western Conference Playoffs with games in hand on the teams they’re chasing.

But Tuesday’s morning skate didn’t come without some shockwaves. Guerin traded Zucker, a second round pick and nine-year veteran with the Wild, to the Penguins for left winger Alex Galchenyuk, defensive prospect Calen Addison and a conditional first round pick in the 2020 NHL Entry Draft. It's Geurin's first trade since replacing Paul Fenton as the head of the front office.

Zucker leaves the Wild after scoring 14 goals and adding 15 assists this season. He was a favorite among fans and was best known off the ice for his work with the University of Minnesota Masonic Children’s Hospital.

“We’re just trying to make our team better. I definitely understand Jason’s longevity here in Minnesota, his impact on the community, all the great things that he’s done here on and off the ice. We had a great guy here for a long time,” Guerin said.

The Wild got goals Tuesday from four different scorers. Joel Eriksson Ek and Jared Spurgeon scored about seven minutes apart to give the Wild a 2-0 lead in the first period.

Kevin Fiala scored his 14th goal of the season in the second period, on Zach Parise’s 400th career assist, as the Wild took a 3-0 lead. Parise later scored his team-leading 21st goal of the season for the icing on the cake on what otherwise might have been a tough day for the organization.

Trades happen in professional sports, and they have no choice but to move forward.

“We’re in that situation right now where we’ve got to win or there might be more of that happening so for us, you just as best as possible, you don’t think about that. You just play and play our best and try to win the games,” Parise said at morning skate.

Mikko Koivu, a team captain, sat next to Zucker in the locker room for most of his time with the Wild. He said it’s tough to see Zucker go, but it’s part of the sport.

“You create a relationship with a person, so it’s tough. At the same time, I think we all know the business part of it,” Koivu said.

The reality for the Wild is they can’t afford to dwell much on Zucker’s departure. They’ve now won four of their past five games and finish the week at home against the New York Rangers and San Jose Sharks.

They’re 17-8-4 at Xcel Energy Center this season, and distractions aren’t really an option when you’re chasing a playoff spot.

“I think they know that you just take care of business yourself and good things will happen,” Boudreau said after the win.