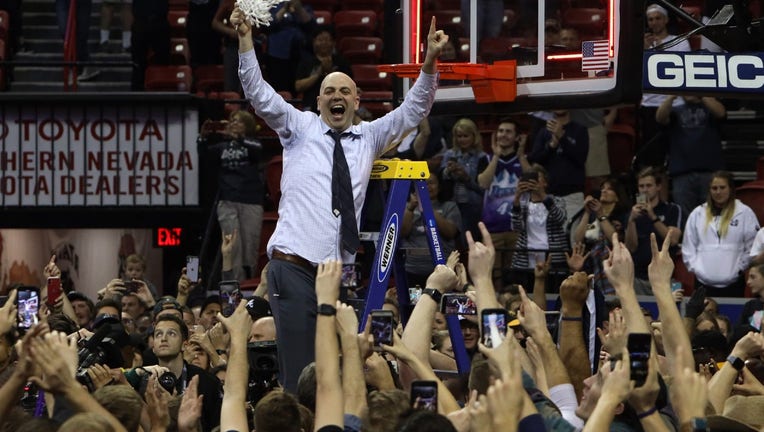 Head coach Craig Smith of the Utah State Aggies celebrates with his team after defeating the San Diego State Aztecs to win the championship game of the Mountain West Conference basketball tournament at the Thomas & Mack Center on March 7, 2020 in ((Photo by Joe Buglewicz/Getty Images))

MINNEAPOLIS - University of Minnesota men’s basketball coach Richard Pitino was dismissed Monday night after eight seasons. The following morning, he was named the new head coach at the University of New Mexico.

Mark Coyle says he’s already fielded phone calls from several interested candidates. Problem is, many of those likely interested are also preparing for the NCAA Tournament.

So if you’re a Gophers fan, which teams should you be watching as March Madness starts? You’re going to want to be near a TV on Friday. Here’s a sample of which potential candidates are in action.

Porter Moser is 186-140 in eight seasons at Loyola Chicago, and is best known for leading the Ramblers to the 2018 Final Four as a No. 11 seed. His name has been mentioned for the Minnesota job, and Loyola Chicago opens the NCAA Tournament as a No. 8 seed facing No. 9 seed Georgia Tech at 3 p.m. on TBS. The Ramblers are 24-4 and won the Missouri Valley.

Dennis Gates is one of the hot young names in the college basketball coaching circle. In just his second season as a head coach, he has the Vikings in the NCAA Tournament after they won the Horizon League title. He’s 30-28 in two seasons, and led Cleveland State to a 16-4 record in league play this year. Cleveland State is a No. 15 seed and has a tall task, playing No. 2 seed Houston at 6:15 p.m. Friday on TruTV.

If you’re willing to stay up a little late on Friday, Brian Dutcher and San Diego State as a No. 6 seed face No. 11-seeded Syracuse at 8:40 p.m. on CBS. Dutcher, 61, is 96-30 in four seasons and led the Aztecs to a Mountain West Conference title. They finished 14-3 in league play this year. Dutcher’s father, Jim Dutcher, coached the Gophers to a Big Ten title in 1982. Brian Dutcher has a clause in his current contract for a $1 million buyout to come to Minnesota.

Eric Musselman went 110-34 in four seasons at Nevada before taking over at Arkansas two years ago. He’s 42-18 with the Razorbacks, including 22-6 this season and ranked in the top 10 in the country. Arkansas is a No. 3 seed and faces No. 14 seed Colgate at 11:45 a.m. Friday on TruTV. Musselman is on the verge of getting an extension at Arkansas, but his current contract calls for a $5 million buyout to leave Arkansas. After April 30, it drops to $1.5 million.

Musselman grew up in Minnesota and his father, Bill Musselman, coached both the Gophers and Timberwolves.