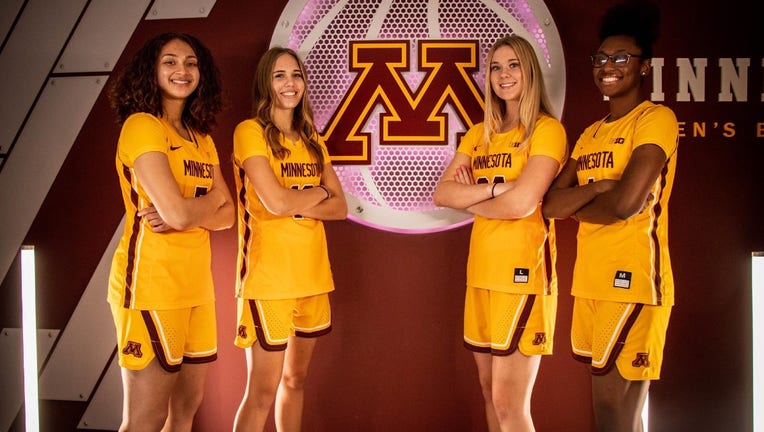 MINNEAPOLIS - Mallory Heyer was the first to commit. Amaya Battle was the last. Mara Braun and Nia Holloway were somewhere in the middle.

All four were Minnesota high school basketball stars, and they all have one thing in common: They want to put the Gophers’ women’s basketball team back on the map. Lindsay Whalen had her biggest recruiting year yet as she enters her fifth season as Minnesota’s coach. The signings of Heyer (Chaska), Braun (Wayzata), Holloway (Eden Prairie) and Battle (Hopkins) from the class of 2022 gave Whalen and the Gophers the highest-ranked freshman group in program history.

The four are also roommates. The team started summer workouts this week, with the four freshman combining to form the No. 10-ranked recruiting class in the country.

"I know they have huge goals and big dreams, and it’s my job and our coaching staff’s job to help them with that," Whalen said Monday. "There’s definitely a spark in everybody, not just the four of this class. It’s an exciting time."

It’s a pivotal year for Whalen, who carries a 60-57 record through four seasons. But the Gophers went just 7-11 in Big Ten play last year, and have yet to reach an NCAA Tournament under the former Gophers’ star.

HEYER: ‘WE WANT TO BUILD A NEW CULTURE HERE’

The choice for her to stay home and play for Minnesota was an easy one. She also instantly became Whalen’s lead recruiter for Braun, Holloway and Battle.

BRAUN: ‘WE’VE JUST GOT TO TRUST EACH OTHER’

Braun, a 6-foot guard out of Wayzata, comes in as Minnesota’s highest-ranked freshman at No. 28 in the country, and the No. 8 point guard. She earned All-State honors three times with the Trojans, and scored over 1,000 career points.

She averaged 18.2 points, 5.5 rebounds, 4.6 assists and 3.5 steals per game in her high school career, while shooting better than 40 percent from the perimeter. Also a standout track athlete, she skipped her final spring season to heal a knee injury and is now fully-healthy.

On a random night at home with her family, Braun got on FaceTime with Whalen to deliver the good news that she was staying home.

"The hope is we’ll do well this year and kind of prove that Minnesota can build a great culture here. Keep future girls in-state, that’s kind of the goal of all of us coming in," Braun said. "That was coach Whay’s goal all along, so for it to become reality is pretty cool."

"It’s going to be challenging our freshman year. People are expecting a lot, but we’ve just got to trust each other," Braun said.

HOLLOWAY: ‘IT’S JUST ABOUT BEING TOGETHER’

Holloway had a hectic ending to her high school career, competing in the state track and field meet and graduating from Eden Prairie just days before starting summer workouts with the Gophers. She won her second straight state title in the high jump, ran the anchors on both the 4x200 and 4x400 relays that took third, and finished ninth in the shot put.

"It was really cool, especially since I won last year. I set a goal at the beginning of the year that I wanted to win again this year and end my high school career for track right," Holloway said.

Her focus now shifts to basketball as she comes to the Gophers as the No. 90-ranked player in the country, and No. 5 in Minnesota. She averaged 16.9 points, 8.1 rebounds, 2.9 steals and 1.2 blocks per game as a senior.

She said from the minute all four learned they would be Gophers teammates, they immediately got close over texting and social media.

"It’s just about being together. We want to be better for each other," Holloway said.

BATTLE: ‘WE WANT TO WIN, WE WANT TO TURN IT AROUND’

Battle joins the Gophers as the No. 39-ranked player in the country and the No. 10-ranked point guard, just behind Braun. She was named Miss Basketball after leading Hopkins to a state championship. She averaged 11 points per game as a senior, and now joins her brother, Jamison, who transferred from George Washington last year to play for Ben Johnson.

Her hope is the class of 2022 is just the start of big things for the Gophers.

"I expect our class to be the class that kind of gets good players from Minnesota to stay home and be a part of the class that really changed the Minnesota Gopher women’s basketball culture," Battle said.

She also said what the stats and rankings say doesn’t mean much, now that they’re college freshmen.

"It feels good, but we haven’t done anything yet. It feels good to see people like acknowledge we have a good recruiting class, but we’ve got to go out there and show people that we are that good of a recruiting class and we can do it," Battle said.

Team officials on Thursday announced the home and road opponents for next season. The Gophers will have home and away games against Illinois, Ohio State, Penn State, Purdue and Wisconsin. They will also host Indiana, Michigan, Nebraska and Rutgers, and travel to Iowa, Maryland, Michigan State and Northwestern.

The means guard Sara Scalia, who left the program after the season and joined the Hoosiers, will return to Williams Arena next season.