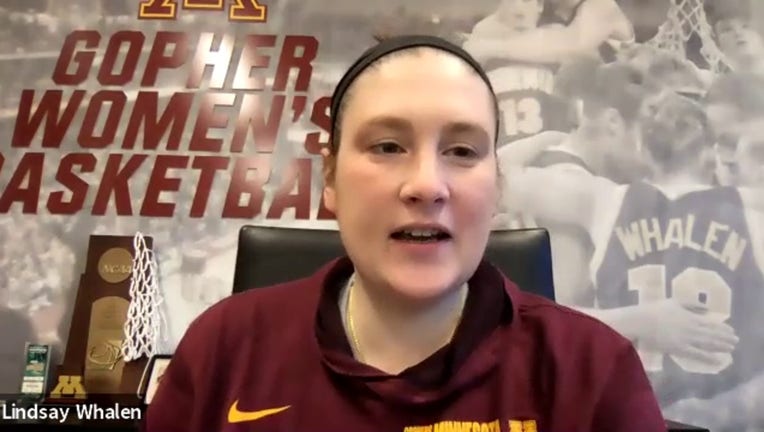 Lindsay Whalen talked Thursday about the Gophers women's basketball team traveling to Illinois on Friday with 8 players available to play due to COVID-19 issues.

MINNEAPOLIS - Lindsay Whalen admitted Thursday that the Gophers women’s basketball season has been a rollercoaster, and they’re probably suffering a little bit of whiplash.

Just when they started feelling good about themselves after a 73-63 win over Nebrask on Feb. 24, the team had to go on pause due to COVID-19 issues. Their game last Sunday against Michigan was canceled, and for the third time this year, the Gophers were affected by the global health pandemic.

"The smiles I saw in the Nebraska locker room were as bright as I’ve seen. Then the next two days, and at the time of the year that it’s happened, at this point when everybody is physically, mentally, emotionally, psychologically fatigued, it’s taken its toll and it’s been difficult," Whalen told reporters via Zoom.

Minnesota is 6-4 in its last 10 Big Ten games, and slowly starting to see improvement despite an 8-11 mark, which includes a 7-10 record in conference play. Minnesota had a bout with COVID-19 before the season, had its Feb. 4 game at Michigan postponed due to COVID-19 issues with the Wolverines and had Sunday’s game canceled.

Whalen said team medical staff has given the all clear for the Gophers to travel to Illinois on Friday. Minnesota will have up to eight players available, though Whalen declined to give specifics.

"We’re planning to go with eight. I’m not going to talk about who they are, but they’re all going to play. You’re going to see tomorrow," Whalen said.

The Gophers had their first practice since their third COVID-19 pause on Wednesday. Unlikely to play Thursday is second-leading scorer Jasmine Powell, who is battling an ankle injury. She’s averaging more than 14 points and 4.6 rebounds per game in 18 starts.

The Gophers are looking for a season sweep of the Illini, after beating them 83-73 back on Feb. 10. Minnesota is looking to build off last week’s win over Nebraska, where the Gophers held a Cornhuskers’ squad that averages 70 points per game to 63. Whalen said the emphasis in practice lately has been on defense, that’s where they’re going to win games.

In nine of their 11 losses, the Gophers’ opponent has scored at least 80 points.

"A lot of it boils down to our individual and team pride on the defensive end. Is our team intensity and edge, everything you have to give every possession defensively, that’s how we’re going to close the gap," Whalen said. I know we can score, we have really talented players who can shoot. But if we’re not going to guard at a high enough level then we can score all we want, we’re not going to win."

Minnesota closes out the regular season at Illinois, then heads to the Big Ten Tournament. At this point, they’re just happy to hold a practice and have a game to prepare for. That’s life when you’re trying to play sports in a pandemic.

"We’re just managing it as best we can as a program and it will be challenging no doubt. We’re able to go, we’re able to play and we’ll play it out," Whalen said.