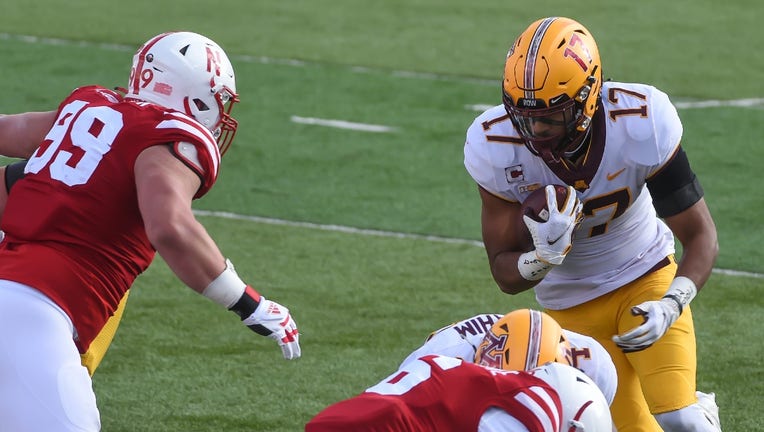 Wide receiver Seth Green #17 of the Minnesota Golden Gophers rushes against defensive lineman Ty Robinson #99 of the Nebraska Cornhuskers in the second half at Memorial Stadium on December 12, 2020 in Lincoln, Nebraska. ((Photo by Steven Branscombe/Getty Images))

MINNEAPOLIS - The University of Minnesota football team will have to find a new wildcat quarterback for the 2021 season. Seth Green announced on social media on Thursday he’s going to graduate this spring and enter the transfer portal.

"The University of Minnesota has blessed me with an experience of a lifetime on and off the field throughout these last five years. I want to personally thank God, my family, coaches, fellow teammates and the rest of the state of Minnesota for molding me into the man I am today. This spring semester, I will graduate with my Master’s degree and become a two-time alumni at the University of Minnesota. After many thoughts, prayers and trusted conversations, I have made the decision to enter the transfer portal and play my last season elsewhere," Green said in a social media post. "I am saddened that this chapter of my life is coming to an end, yet excited for what God has in store for my future."

Green, a redshirt senior out of Woodbury, has an extra year of eligibility for 2021 due to the COVID-19 pandemic. He was a high school standout at East Ridge before spending his final year of high school playing football in Texas. Green originally committed to Oregon before ending up at Minnesota.

He came to the Gophers as a wide receiver before switching to tight end and eventually a quarterback in short yardage situations. Green played in seven games last season, with nine carries for seven yards and two touchdowns. He added three catches for 39 yards.

Green was known as a leader in the locker room, and was active in social justice causes for the Gophers after the 2020 Memorial Day police killing of George Floyd in south Minneapolis.