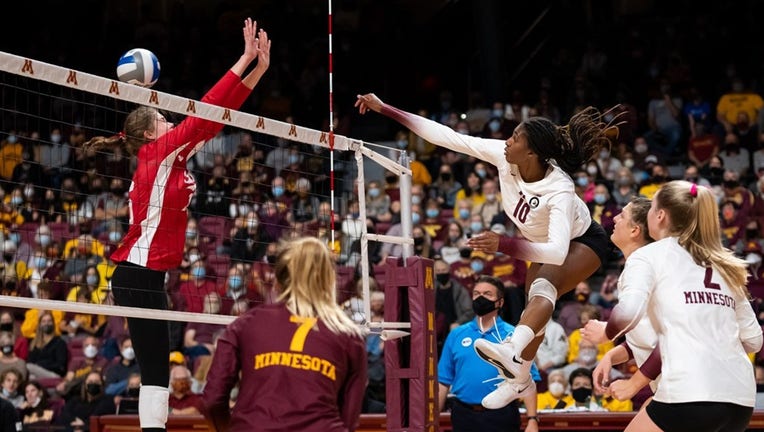 MINNEAPOLIS - The University of Minnesota volleyball team announced its 2022 regular season schedule on Tuesday, and it might be one of the toughest yet in Hugh McCutcheon’s tenure with the Gophers.

Minnesota will have eight non-conference matches before a 20-match Big Ten slate. The Gophers will open the 2022 regular season against Baylor in Fort Worth, Texas, on Aug. 26 as part of the Big Ten/Big 12 Challenge. That’s a rematch of the NCAA Sweet 16 last year, which the Gophers won in five-set marathon.

The Gophers will host Florida on Sunday, Sept. 4, for their home opener at Maturi Pavilion. Minnesota’s schedule features 16 teams that finished the 2021 season in the top-25, and seven that finished in the top-10. The Gophers will host at least eight matches against top-25 teams, will face 19 NCAA Tournament teams from last year and 12 teams that reached the Sweet 16.

All but one of the Gophers’ non-conference matches are against NCAA Tournament teams, as are 12 of their 20 Big Ten matches. The Gophers host the Big Ten/Pac-12 Challenge this year, hosting Oregon on Sept. 9 and Stanford on Sept. 10. They also travel to Texas this year, a program that made the Elite Eight in 2021.

Minnesota closes out the regular season with four straight road matches, including a back-to-back at Penn State Nov. 18 and at Rutgers Nov. 18. The Gophers are at Ohio State the Friday after Thanksgiving, and finish the season at Nebraska on Nov. 26.

McCutcheon is entering his 11th season at Minnesota and has led the Gophers to nine NCAA Tournaments, seven trips to the Sweet 16 or better and three appearances in the Final Four, most recently in 2019. The Gophers last won the Big Ten title in 2018.