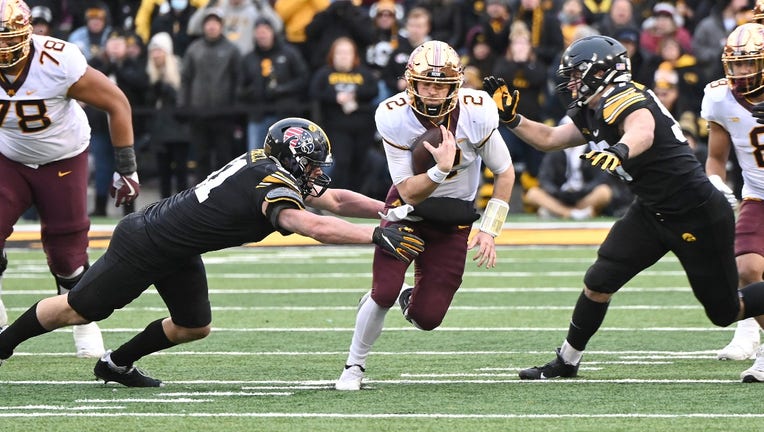 MINNEAPOLIS - Two years ago, Tanner Morgan was one of the best quarterbacks in the country as the University of Minnesota football team went 11-2, and had it’s best season in more than 100 years.

Morgan set several school records, with the help of Rashod Bateman and Tyler Johnson. Last year, Morgan had an up and down season, understandable with the COVID-19 pandemic and his dad battling a brain tumor. The 2021 season has been a struggle for Morgan. The Gophers are 6-4 after Saturday’s loss at Iowa, and Morgan has yet to throw for 300 yards in a game this season.

Minnesota is reliant on the run, but Morgan has thrown for more than 200 yards just twice. Saturday, he was 14-of-30 for 183 yards and a 68-yard touchdown to Chris Autman-Bell. There were also some key throws missed at critical times, and at least three drops.

"We’ve just got to capitalize, that’s really all it comes down to. It really comes down to execution. If we would’ve executed a couple more plays, who knows what happens. You just have to learn from it and move on," Morgan said Tuesday.

In the Gophers’ four losses this season, Morgan is throwing for 156 yards per game. He’s also had stretches without Autman-Bell, Daniel Jackson and Dylan Wright, who played just four snaps at Iowa.

Morgan is one of several seniors who have the option to return in 2022, due to the free year from the COVID-19 pandemic. He said Wednesday he’s focused on Indiana, and will think about his future after the season.

"I know I have to play a lot better to give us an opportunity to win games. To think about anything else doesn’t really matter," Morgan said.

Monticello native and redshirt senior Conner Olson is primed to set NCAA history on Saturday. The Gophers are at Indiana, and he’ll set a record with his 56th college start. He’s already got Gophers and Big Ten program records for starts, and after Saturday he’ll lead all of college football.

He’s been a staple for one of the top rushing offenses in the Big Ten, and is in the process of trying to get into medical school.

"Conner Olson has been pretty much the heart and soul of our offense. He’s the hardest working kid, on and off the field," tight end Ko Kieft said.

Gophers’ defensive coordinator Joe Rossi on Monday was named a nominee for the 2021 Broyles Award. It goes annually to the top assistant coach in college football.

Rossie was one of 59 nominees out of nearly 1,300 assistant coaches in Division I college football. The Gophers are 24-12 with Rossi leading the defense, are No. 7 nationally in total defense at 296.7 yards per game, No. 9 nationally in rushing defense and tied for 16th in scoring, allowing 19.2 points per game.

"I don’t think there’s a coach that cares more, is more detailed and is more passionate than Coach Rossi. I came into the locker room after practice and texted him. He responded, ‘Back to work on Indiana.’ That’s just the type of person that Coach Rossi is," linebacker Mariano Sori-Marin said.

The Gophers final two regular season games are at Indiana on Saturday, and the regular season finale against Wisconsin. Minnesota needs to win out, and have Iowa lose once between Illinois and Nebraska, to win the Big Ten West. The Hoosiers were the talk of the Big Ten last season, one win away from shocking Ohio State for the Big Ten East title.

The 2021 season has been a much different story. Indiana is 2-8 on the season, and winless in the Big Ten at 0-7. The Hoosiers lost to Rutgers 38-3 last week. Fleck’s message to his team this week? Treat the Hoosiers like an 8-2 football team, not 2-8. Indiana has six of its eight losses to opponents ranked in the top 20 at the time. The Hoosiers played Ohio State and Maryland close in losses, but have been out-scored a combined 67-10 the last two weeks against Michigan and Rutgers.

"It’s Senior Day, they’ve got a bunch of seniors on their team and they’re going to give us their best shot. Their record doesn’t show it, but they’re an excellent team," Kieft said.

It’s a 2:30 p.m. kickoff, and a must-win for the Gophers to have chance to stay in the Big Ten West race.