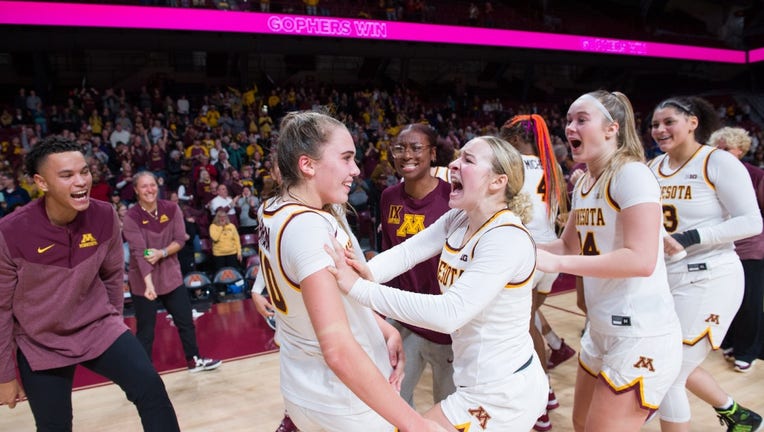 Mara Braun is the Big Ten Freshman of the Week after hitting a buzzer-beater in the Gophers' 101-99 win over Lehigh on Sunday. (credit: University of Minnesota Athletics)

MINNEAPOLIS - Former Wayzata star Mara Braun has had quite the start to her college career with the University of Minnesota women’s basketball team.

Braun was named the Big Ten Freshman of the Week on Monday after scoring 34 points and hitting a buzzer-beater 3-pointer to lift the Gophers over Lehigh, 101-99, on Sunday at Williams Arena. Braun was mobbed by her teammates and shared a moment with Lindsay Whalen before taking a moment for herself, overcome with emotion and fighting a few tears.

It was Minnesota’s first buzzer-beater since Carly Wagner beat Ohio State in 2016.

In her collegiate debut, Braun scored 21 points as the Gophers beat Western Illinois, 75-45. For the week, she averaged 27.5 points. Her 34 points against Lehigh is the second-most for a freshman in program history. She’s one of nine NCAA players, and two in the Big Ten, to score at least 34 in a game this season.

Braun, the top-rated player in Whalen’s highly-touted 2022 class, is also averaging five rebounds and four steals per game, while shooting 46.7 percent from the field.