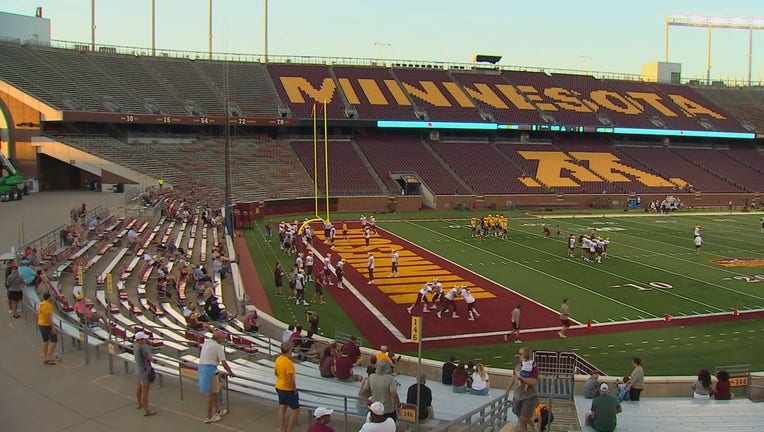 Fans had their first chance to watch the Gopher football team play in-person at the stadium since the pandemic began. (FOX 9)

MINNEAPOLIS - The University of Minnesota football team announced Wednesday it will have three of its fall camp sessions open to the public before kicking off the 2022 season on Thursday, Sept. 1 against New Mexico State.

The Gophers are coming off a 9-4 season as PJ Fleck enters his sixth season with the program. The 2021 season ended with a 23-13 win over rival Wisconsin for Paul Bunyan’s Axe, and an 18-6 win over West Virginia in the Guaranteed Rate Bowl. Minnesota was wins over Iowa and Illinois away from playing for the Big Ten championship in Indianapolis.

PJ Fleck joins Jim Rich at Big Ten Media Days in Indianapolis to talk about the 2022 season for the University of Minnesota football team.

Here’s a look at the Gophers open practice schedule for 2022 fall camp:

The Gophers’ first practice open to the public is this Saturday, also FAMILY Day at Huntington Bank Stadium. Fleck is holding the event after Minnesota’s Spring game back in April had to be moved indoors due to weather.

Saturday’s open practice will include a Fan Zone in the West Plaza with inflatables, yard games, photo stations and family activities. The Gophers are also hosting their annual Diaper Drive, where fans are encouraged to bring disposable diapers and wipes that will be donated to the Diaper Bank of Minnesota, which gives them to families in need through partner organizations across the Twin Cities.

Fans are also encouraged to bring a decorated oar, which will be hung on the wall inside the tunnel between the Gophers’ locker room and where the players enter the field at Huntington Bank Stadium. The Gophers’ practice on Aug. 15 at Athletes Village will also be attended by members of Big Ten Network.