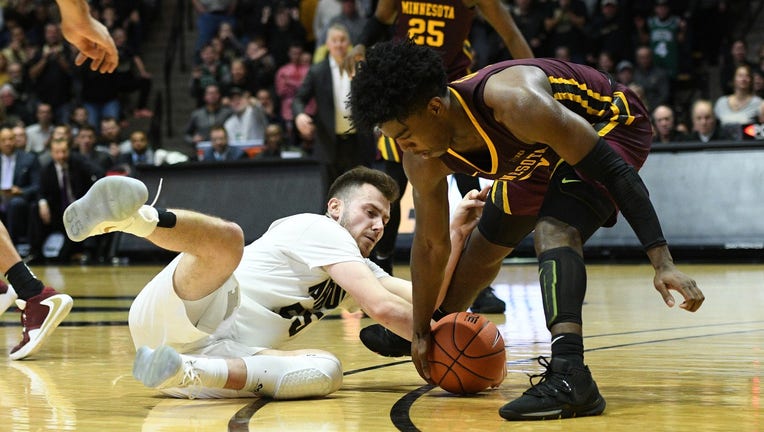 MINNEAPOLIS - The University of Minnesota men’s basketball team had a winnable road game slip away in an 83-78 double overtime loss at Purdue Thursday night.

Daniel Oturu led the Gophers with 29 points and 18 rebounds, shooting 12-of-22 from the field, including 2-of-4 from three-point range. Marcus Carr added 27 points and six rebounds, and got Minnesota out to a five-point lead with 1:45 left in regulation before Purdue made a run to force overtime.

Matt Haarms scored 26 points and grabbed nine rebounds off the bench to lead the Boilermakers, playing 40 minutes coming off a concussion. Sasha Stefanovic made the two biggest shots of the night for the Boilermakers. Carr had one of his eight turnovers on the night late in regulation with the Gophers up three, but Purdue got a steal from behind and Stefanovic hit a 3-pointer to send the game to overtime.

The Gophers had the ball in overtime with a chance to win the game, but Carr’s driving shot fell off and Oturu tried a rebound and put back that fell off, forcing a second overtime. Purdue went on a 6-0 run in the second overtime, and Stefanovic hit another 3-pointer to seal the win for the Boilermakers.

Gabe Kalscheur added 13 points on 5-of-15 shooting, including 3-of-10 from the perimeter.

The Gophers trailed by as many as eight in the second half before making a run and taking a 62-57 lead in the final two minutes. After leading the Gophers back in the final minutes, Carr did not score in either overtime and committed six turnovers.

The loss snaps a three-game win streak for the Gophers (7-6, 1-2) who host Northwestern Sunday night at Williams Arena. It’s a pivotal game as Minnesota travels to Michigan State next week.