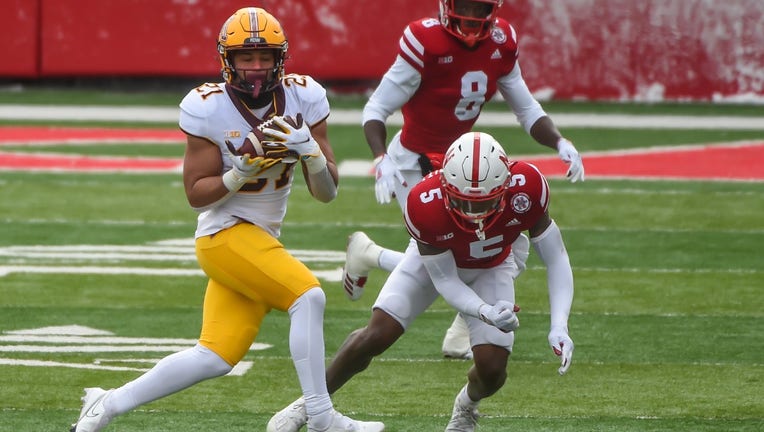 Running back Bryce Williams #21 of the Minnesota Golden Gophers catches a pass in front of cornerback Cam Taylor-Britt #5 of the Nebraska Cornhuskers during the first half at Memorial Stadium on December 12, 2020 in Lincoln, Nebraska. ((Photo by Steven Branscombe/Getty Images))

MINNEAPOLIS - The University of Minnesota football team is at Wisconsin on Saturday for Champions Week to finish the 2020 season, and it could be the healthiest the program has been all season.

The Gophers were without 33 players last Saturday between COVID-19 issues and injuries, yet still managed to get a 24-17 win at Nebraska to improve to 3-3 on the season. Minnesota is looking to win back Paul Bunyan’s for the second time in three years, after losing to the Badgers 38-17 last year with the Big Ten West title on the line.

According to multiple pregame reports, it appears center John Michael Schmitz will be back against Wisconsin after missing last week’s game at Nebraska. The Gophers had three offensive linemen make their first starts against the Cornhuskers, were down to one tight end with playing experience and had just six defensive linemen available.

Minnesota expects to have several players who couldn’t play at Nebraska back to face Wisconsin, including defensive lineman Micah Dew-Treadway.

What we don’t know is if Saturday will be the final game of the season for the Gophers. With a win over the Badgers, Minnesota would likely get invited to a bowl game. But several programs have already opted out of bowl appearances so players can be with their families over the holidays.

We’ll find out Sunday if the Gophers get invited to a bowl game.