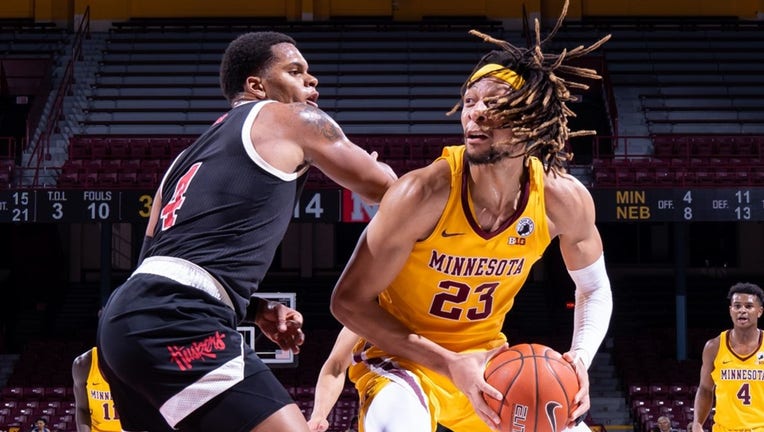 MINNEAPOLIS - Richard Pitino will never apologize for getting a Big Ten win, nor should he.

The University of Minnesota men’s basketball team has battled adversity in some form for much of the season, mostly COVID-19 related. Monday night against Nebraska, they fought through early foul trouble from Liam Robbins and Marcus Carr, and another rough night from three-point range in a 79-61 win over the Cornhuskers at Williams Arena.

The Gophers (12-7, 5-7) improved to 12-1 at home this season, and snapped a three-game losing skid. Nebraska dropped to 0-7 in the Big Ten, has lost 24 straight league games and was playing just its second game in 30 days due to COVID-19 issues.

Carr and Robbins each got whistled for three first-half fouls, making life difficult for Pitino from the sidelines.

Carr led the Gophers with 21 points on 7-of-11 shooting, and added eight assists in just 19 minutes. The Gophers had a 19-point lead cut to seven in the second half, then Carr came back into the game with four fouls and took control.

He took Monday’s game personally, after missing a pair of shots late in regulation in last Thursday’s 76-72 loss at Rutgers. He finished that game with a season-low six points, but bounced back Monday.

"I take pride in being able to make plays down the stretch. It’s definitely one that I took on the chin, I told the guys that loss was on me. Definitely wanted to come out here today and not take this one lightly," Carr said.

With Carr and Robbins each battling foul trouble, Pitino turned to Brandon Johnson. The senior forward finished with a double-double of 13 points and 10 rebounds, seven on the offensive glass, played 36 minutes and never left the floor in the second half despite battling a finger injury.

"He was terrific, he saved us. I didn’t sub him out in the second half because I thought we needed him," Pitino said.

"Just working hard on the effort areas of the game. Just crashing hard for offensive rebounds, working 110 percent on the defensive end. Tried to hold things together until those guys got back in the game," Johnson said.

Jamal Mashburn Jr. added 11 points off the bench, and Gabe Kalscheur finished with 10 despite shooting just 3-of-13 from the field, and 1-of-9 from three-point range. At some point, the Gophers will need to start hitting perimeter shots. They’re last in the Big Ten in three-point shooting, and shot 8-of-32 (22 percent) Monday, including 3-of-15 in the second half. At one point, they missed 20 straight shots.

The Gophers never trailed in the win, led 32-16 early and 45-30 at the half. Nebraska got as close as 59-52 in the second half, with Robbins and Carr on the bench, before they both returned and the Gophers pulled away, going on a 15-4 run to take a 74-56 lead with 2:06 to play. Robbins finished with seven points and eight rebounds in just 18 minutes before fouling out.

"We’re a better team when they’re on the court. It’s really hard to win when you have that much foul trouble," Pitino said.

The Cornhuskers shot just 36 percent from the field for the game, and committed 18 turnovers. They were also without their leading scorer, Teddy Allen, for failing to meet expectations within their program.

The Gophers get another chance to a quality win Thursday, when they host Purdue.