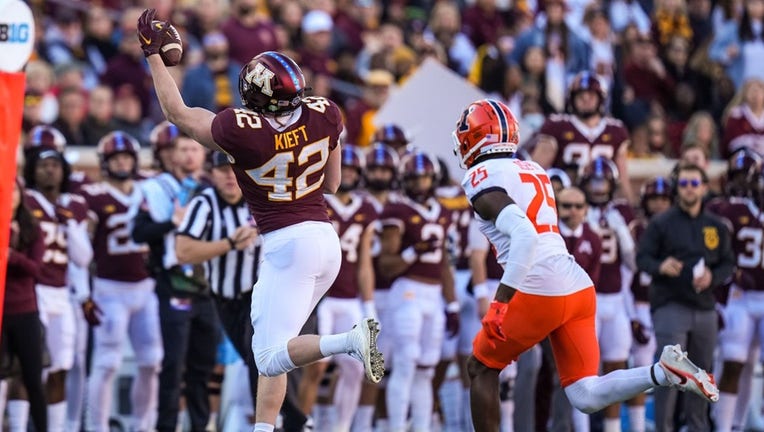 MINNEAPOLIS - The University of Minnesota football team heads to Iowa on Saturday for its biggest game of the season yet.

The Gophers and Hawkeyes are among four teams tied atop the Big Ten West at 4-2, with three regular season games left. It’s the 87th meeting in the battle for Floyd of Rosedale, and the series couldn’t be more even at 42-42-2. Minnesota is looking for its first win over Iowa since 2014, and first win in Iowa City since 1999.

P.J. Fleck and his Gophers look to bounce back after their loss to Illinois against the Hawkeyes this weekend. Minnesota is going for the program’s first win in Iowa City since 1999. Hobie Artigue, Ron Johnson & Justin Gaard recap last week’s game and look ahead to Iowa on this edition of The P.J. Fleck Show.

Here are five keys in the rivalry game.

WHO WILL PLAY QUARTERBACK FOR IOWA?

Spencer Petras was the Hawkeyes’ starting quarterback to start the season, and he was sidelined last Saturday after three series at Northwestern with a shoulder injury. Enter Alex Padilla, who finished 18-of-28 for 172 yards as the Hawkeyes held off the Wildcats’ 17-12 to snap a two-game skid. Padilla has played in five games this season, but completed just 22 passes for 233 yards. It’s a situation to monitor, as it appears Padilla will be the quarterback on Saturday.

THE BALL IS THE PROGRAM

Turnover margin will likely be the difference in Saturday’s game. Iowa is No. 3 in the country with 24 takeaways through eight games. They have 19 interceptions, and five fumble recoveries. The Hawkeyes are No. 2 in the nation in turnover margin, at plus-12. The Gophers are -2 on the season.

To quote PJ Fleck, "The ball is the program." Tanner Morgan has six passing touchdowns, and seven interceptions on the season. Morgan was intercepted twice in last week’s loss to Illinois. Simply put, the Gophers have to protect the football at Kinnick Stadium.

"You have to win the turnover battle here, you have to. In a rivalry game especially, but any time you play Iowa. When you watch them play defense, all 11 guys somehow, some way, their eyes are on the football," Fleck said. "They do what they do, they’ve done what they’ve done for forever on defense and they’re very good at what they do."

OFFENSIVE LINE HAS TO STEP UP

Minnesota’s offensive line had been stout in four straight Big Ten wins before facing Illinois. The Gophers ran for more than 300 yards in wins over Maryland and Northwestern. Against Illinois? They had just 89 yards, and 2.5 yards per carry.

Tanner Morgan was also sacked six times, a season-high. Iowa is the No. 2 rushing defense in the Big Ten at 98.6 yards per game. The Hawkeyes are No. 6 in passing defense. The offensive line needs its best game of the season to open up rushing lanes for Ky Thomas and Mar’Keise Irving, and give Morgan time to find receivers.

The Gophers’ defense, which has played well most of the season, has a big task Saturday. Iowa loves to run the football, and target tight ends in the passing game. Tyler Goodson is rushing for 83.8 yards per game, and has six touchdowns on the season. Tight ends Sam LaPorta and Nico Ragaini are two of the top three receivers. LaPorta has 34 catches and two touchdowns, Ragaini has 22 catches and one score.

Contain Goodson and the tight ends, and the Gophers give themselves a real chance for a rivalry win.

END THE SKID, STAY IN THE BIG TEN WEST RACE

"We talked about being in November and being in a hunt for a championship, and here we are with 19 days left. That’s what we said, every year we want to be in that type of hunt. With all the challenges we’ve had and all the playmakers out, we’re in that hunt," Fleck said. "It says a lot about the fight in this football team."