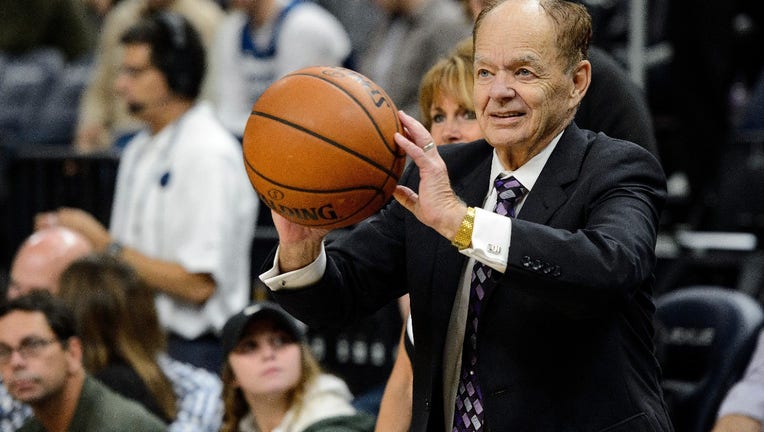 MINNEAPOLIS - Glen Taylor made one thing very clear in an interview with FOX 9 Sports Director Jim Rich on Wednesday: Potential buyers wanting to move the Timberwolves out of Minnesota won’t be considered.

Taylor, 79, confirmed reports earlier this week that the Minnesota Timberwolves and Lynx are for sale. Taylor has retained The Raine Group to help with that process. If he finds the right partner, Taylor prefers to sell the team before the end of the year. Taylor bought the Wolves for $88 million back in 1994. He reportedly is seeking about $1.2 billion for the franchise.

And in case it’s not 100 percent clear, the Wolves and Lynx are staying in Minnesota. The new owner won’t have the option to move the team elsewhere.

“I made it very clear that that’s not one of the options, it’s not a price deal at all. It’s going to stay in Minnesota and it will be in the negotiations that it has to stay here in Minnesota,” Taylor said on Wednesday.

Taylor says he’s heard from several families about having interest in buying the team. ESPN’s Adam Schefter reported earlier this week that Vikings’ owners Mark and Zygi Wilf were serious contenders to buy the team from Taylor, but that team has since settled as they voiced their support to keep the franchise in Minnesota. There are no active talks on the Wilf’s side to buy the team.

Another interested buyer would have Wolves fans very excited. Former legend Kevin Garnett went to social media to say he’s forming a group to make an offer. It’ll be a complicated process for that to happen. Garnett was drafted by the Wolves out of high school in 1995 and spent his first 12 seasons in Minnesota.

He led the Wolves to the 2004 Western Conference Finals, and eventually traded to the Boston Celtics, where he won an NBA title. Garnett returned to Minnesota in 2014 for his final two seasons, to reunite with Flip Saunders. A path to having Garnett become an owner fell through when Saunders died of cancer in 2016. Garnett has since said he wants nothing to do with Taylor, even calling him a snake.

Taylor said he was hurt by those comments.

“Of course it hurts because I look at it entirely different in that since I think that I was for him, especially when he was young, he came down to my house lots of times and I mentored him on how to work business deals that he wanted to get involved in, mentored him on foundations, different things that he wanted to look at outside of basketball, and we had a close relationship,” Taylor said. “I’m sorry that he said those things, I’m not going to respond to any of those comments. I learned a long time ago in life you need to be very careful about what you say, it can come back and haunt you.”

There is not a firm timetable for Taylor to sell the franchise, but if it happens, he would prefer it happens before the end of the year. He does plan to stay on in the ownership group and help with the transition if he finds a buyer that’s a good fit.

The Wolves, for the 14th time in 15 years, didn’t make the playoffs, though nothing was normal about this year. The NBA suspended its season on March 12 due to the Covid-19 pandemic, and the Wolves were 19-45 at the time. They were one of the eight teams not invited to the NBA bubble in Orlando.

But they’re in a time of transition. Gersson Rosas has taken over the front office, Ryan Saunders is the head coach and they’re building around stars Karl-Anthony Towns and D’Angelo Russell. They also should have a high-end first round pick whenever the NBA Draft happens.

“We’re going to be a young team again next year. I have every reason to believe we’ll be much more competitive, so I’m excited about it,” Taylor said.

The bottom line is Taylor isn’t selling the team just to make money off a transaction. He’s going to find the right partner, and the team is staying in Minnesota.