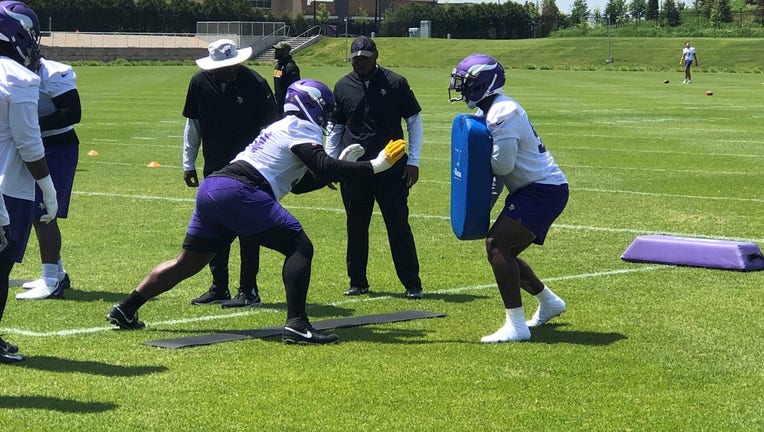 MINNEAPOLIS - NFL Draft weekend is a moment Esezi Otomewo will never forget. The former University of Minnesota defensive end was back home in Indianapolis with family and friends when he got the call that would change his life forever.

The Vikings were on the clock in the fifth round with the No. 165 overall pick. They were taking Otomewo to add defensive line depth. He joined Boye Mafe, Ko Kieft and Daniel Faleele as 2022 draft picks. He earned All-Big Ten Honorable Mention honors in 2021 and in his final season with the Gophers, he had 30 tackles, 4.5 tackles for a loss, three sacks and one safety.

In 46 career games and 20 starts with the Gophers, he had 81 tackles and 7.5 sacks. He'll be switching from defensive end to tackle in the NFL. Fox 9 caught up with Otomewo this week at Vikings mandatory mini camp to talk about his journey to the NFL.

Man I ain’t going to lie to you, 23 years of life right now, like I’m blessed just to be in this situation. After all I’ve accomplished, I’m very proud of myself and I know my family is proud of me as well. I’m truly grateful.

WHAT’S IT LIKE GOING THROUGH OTAs AND MINICAMP AS A ROOKIE?

Man, just come out here. I was just out here with Za’Darius (Smith) not too long ago, just picking his mind and getting to know him. Knowing like the D-line, taking little tendencies, little traits that they do and apply them to my game.

WHAT HAVE THE COACHES TOLD YOU ABOUT CONTRIBUTING ON DEFENSE?

I would say just to stack days. Come in here with a mindset to do your best and contribute to the team. I play defensive tackle now, and I see myself as a pass rusher and a run-stopper as well. Just to help the team in any shape or form, for real.

HOW DID PLAYING FOR PJ FLECK AND THE GOPHERS PREPARE YOU FOR THE NFL?

I would say they prepared me for life off the field and on the field. They prepared me in many ways, on many fronts. Coach (Joe) Rossi did a great job and Coach Fleck did an amazing job helping me get to this point.

AT WHAT POINT IN YOUR CAREER DID YOU REALIZE THE NFL WAS POSSIBLE?

Probably when I was getting offers in high school. It was a long-time dream coming, so having that mindset and determination every day to get to this point, it was hard. But at the same time, nothing is easy in life so you’ve got to come and go chase your goals and put 100 percent effort into it.

WHAT WAS IT LIKE TO SEE BOYE MAFE GET AND OTHER TEAMMATES GET DRAFTED?

Man it’s amazing. We worked for this. Me and Boye, we’re in and out of the facility every day. To see Daniel (Faalele) get drafted, to go see Ko Kieft get drafted, to have a lot of players in the league, it’s amazing. The thing I’m probably most excited for is jersey swapping with my teammates from the Gopher family. Hug them after the game, that’s probably the most exciting thing.

TAKE US BACK TO DRAFT DAY – WHAT WAS IT LIKE?

I was with my mom, my dad, a couple close friends. Nothing too big, I was back in Indianapolis enjoying it. Coming from Minnesota after knowing where I’m coming back from, somewhere I’m familiar, somewhere I feel I care about. It’s a huge relief. Being moved to another city, I couldn’t imagine it. But now I know everywhere to go, all the good food spots, where to get my hair cut. Things of that nature, it’s amazing.

WHAT’S IT LIKE TO BE TEAMMATES WITH DANIELLE HUNTER AND ZA’DARIUS SMITH?

Man it’s amazing. To see them in practice, I pick up a lot of game from them. I try to apply it to my game as well.

DOES THE REALITY OF THE NFL HIT WITH YOUR FIRST CHECK?

It does but at the same time, it’s really not about the money. I play football because it’s a passion, and I love it to death. Just coming out here every day brings me joy, and that’s the happiness I need.

Otomewo and the Vikings are now off for six weeks before starting training camp in late July.