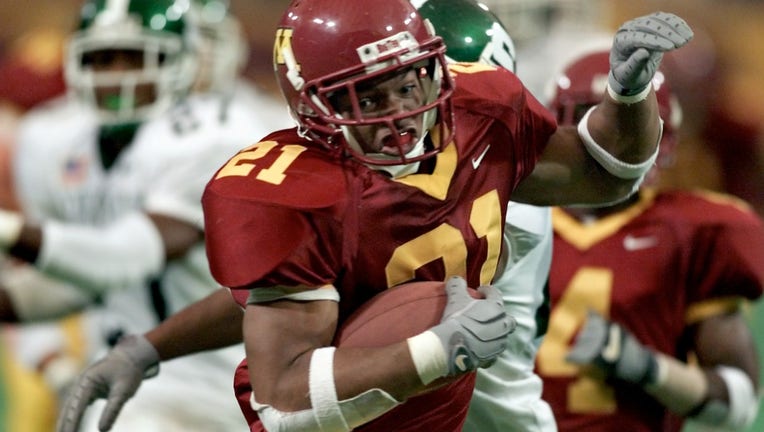 Gopher running back Marion Barber III runs away from Michigan State defenders enroute to a 4th quarter touchdown ensuring the Gophers of their first Big Ten victory of the season. ((Photo By MARLIN LEVISON/Star Tribune via Getty Images))

MINNEAPOLIS - Former University of Minnesota and Wayzata football star Marion Barber III was found dead by authorities in Frisco, Texas Wednesday morning, according to a report from the Fort Worth-Star Telegram.

Authorities responded to a welfare concern on Wednesday at an apartment believed to be leased by Barber. That's where it's believed he was found dead.

As news breaks that Marion Barber III has been found dead, FOX 9 spoke with former coaches and teammates about their memories of him.

Barber, a Plymouth native, was 38 years old and set to turn 39 on June 10. He earned All-State honors his senior year with the Trojans as a running back and defensive back. He ran for 1,778 yards and 18 touchdowns as a high school senior, and led Wayzata with 10 interceptions.

Barber’s father, Marion Barber, was a Gophers’ running back from 1977-80. His brothers, Dom and Thomas, played for the Gophers as well.

"Our hearts are absolutely broken, as we lost one of the greatest to ever wear the Maroon and Gold today. Our thoughts are with the amazing Barber family during this tragic time," team officials with the Gophers said in a statement on social media Wednesday night.

Barber was the No. 109 overall pick in the fourth round of the 2005 NFL Draft by the Dallas Cowboys, and played his first six seasons in Dallas. He earned a spot in the Pro Bowl in 2007 after rushing for 975 yards and 10 touchdowns. He finished his NFL career with 4,780 rushing yards and 53 rushing touchdowns. He played for the Chicago Bears in 2011 before retiring from football in 2012.

Authorities have not released Barber’s cause of death.