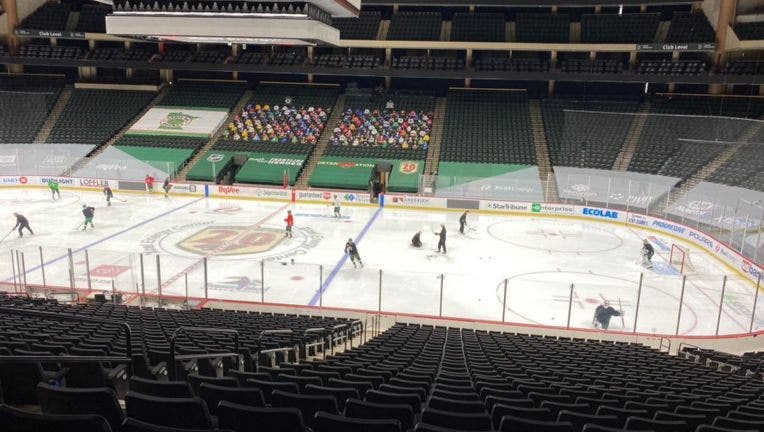 The Minnesota Wild practicing at the Xcel Energy Center in Feburary.

(FOX 9) - Several Minnesota sports teams announced they will once again have fans in attendance at home games this season after Gov. Tim Walz announced new COVID-19 guidelines for large venues, including sports stadiums.

The Minnesota Wild announced Friday they will be able to have 3,000 fans at the remaining home games, starting April 5 when the Wild host the Colorado Avalanche.

The team welcomed around around 40 season ticketholders per home game back to the X in February.

For the first time in nearly a year, a group of season ticket holders will make their return to the Xcel Energy Center as the Wild host a pair of home games.

Wild season ticketholders will be given first priority to purchase tickets and will be contacted directly, the team said. Fans may be able to purchase single-game tickets depending on availability.

Timberwolves will be able to host up to 3,000 fans at Target Center for their remaining home games, starting on April 5 when they host the Sacramento Kings.

The team announced Friday season ticket members will each receive a pair of complimentary tickets to an April game and have priority access to purchase tickets to the final twelve home games.

Minnesota Twins can have fans at Target Field at 25% capacity

The Minnesota Twins will have fans in the stands for the team’s April 8 home opener after Gov. Tim Walz announced new COVID-19 guidelines for large venues, including sports stadiums.

The Minnesota Twins will be able to have up to 10,000 fans, in the stands for Opening Day at Target Field on April 8.

Twins season ticketholders will get priority access to tickets each month, according to a news release from the team Any remaining tickets will be made available to the general public on a month-to-month basis. Tickets for games from April 8 through May 6 will go on sale later this month.

The Minnesota United said in a statement Friday they are "looking forward to bringing our fans back to Allianz Field," but did not provide additional details about how many fans will be allowed or how tickets will be allocated.

The St. Paul Saints plan to have 2,100 fans at CHS Stadium for the May 11 home opener, their first home game as the Twins’ Triple-A affiliate.

"Fans are the lifeblood of our organization. They are a big reason for our success for the last 28 seasons," the Saints said in a statement. "On May 11 we look forward to hearing 2100 fans laughing, cheering and welcoming a new chapter of Saints baseball. Very excited for the entire MN sports community."

The Saints had up to 1,500 fans socially distanced in the stadium during their shortened 2020 season.

FOX 9 has reached out to the Lynx on whether they plan to have fans in attendance during the 2021 season.

Target Center has a capacity of nearly 19,000 for Timberwolves and Lynx games. Under the current guidance, the teams could host around 3,000 fans.

The Vikings season is a long way off, but the team said Friday’s news is a "significant step towards our goal of hosting a full stadium this fall."

The Vikings had hoped to have fans at U.S. Bank Stadium at some point during the 2020 season, but ultimately ended the season without having had any fans in attendance at home games.

Under the current guidance, up to 10,000 fans would be allowed at U.S. Bank Stadium.