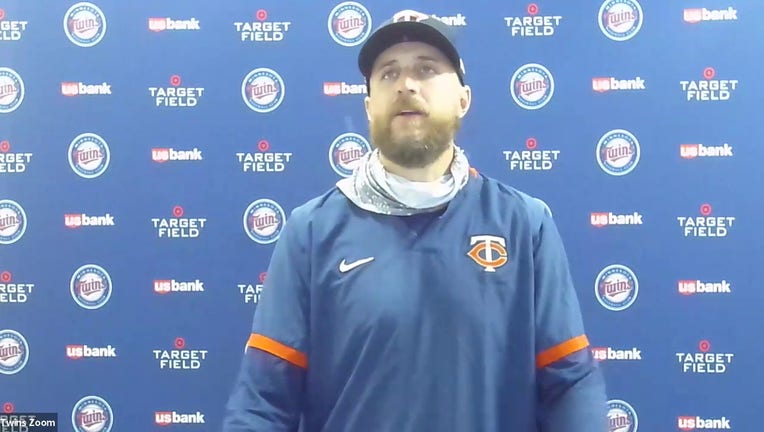 MINNEAPOLIS - The Minnesota Twins brought the noise in a variety of ways in the team’s second intra squad scrimmage in as many nights on Thursday at Target Field.

There were public address announcements, there was walk-up music for hitters, music in-between pitches and even sound bites after recorded outs or loud hits. It’s all in an effort to make the game seem a little more real as we’re nearly two weeks way from Opening Day in Chicago.

It’ll add another element for stadiums, including Target Field, that likely won’t have fans in the stands when actual baseball games start. The Twins streamed the game on their social media channels, and for a majority of the game, more than 1,000 people were watching live. The hunger for live sports is real.

“Big picture I think it’s very helpful. It adds to the experience. Overall it does give you, if only for some brief periods, some adrenaline, some flashes to regular season action where you have some of the same feelings and you definitely have some of the same emotions out there,” Twins manager Rocco Baldelli said.

Baldelli got help in that respect from Sergio Romo, who could be heard audibly yelling on several occasions from the bullpen area all the way to the dugouts.

“Sergio all by himself is an in-game experience. I think he was having a good time, I think he was testing the acoustics in the building in a lot of ways. It helped, we were laughing while we were standing in the dugout,” Baldelli joked.

As for on-field performances, Jake Odorizzi took a no-hitter into his fourth inning of work before Luis Arraez blooped a single to center. Odorizzi had retired seven straight hitters prior to that.

Byron Buxton followed with a rocket off the fence in left center for a double, and eventually scored. It’s the second straight night Buxton has found the barrel on the ball for an extra base hit.

“I was not the only one talking about him today in the dugout, believe me. Players and staff were commenting that he was just having tremendous at-bats,” Baldelli said.

Josh Donaldson also became the newest member of the Bomba squad Thursday night. He launched a Lewis Thorpe offering for a home run to right, the first run scored of the Twins’ summer camp.

After hitting 37 homers last year, the Twins hope it’s just the start to a big summer. Donaldson trotted around the bases, waving himself around first with the Bomba squad siren sounding and did a MLB video game-style celebration after touching home plate. Baldelli gave him a socially-distanced foot tap after.

“Might have missed a little bit of the celebration, I stuck my foot out. I’m glad I didn’t trip him because that was going to be the maximum contact I was going to give. I’ve seen Josh play for a long time, that looked like vintage Josh Donaldson,” Baldelli said.

Odorizzi’s final hitter of the night might have been the highlight for Baldelli. He faced Buxton for a 13-pitch at-bat that featured several consecutive pitches fouled off. They eventually called the at bat over to end the inning.

Odorizzi gave up two earned runs, both in his last inning of work, on three hits while striking out four and walking one. He threw 73 pitches, 54 for strikes.

“That last at-bat, I think, was really good for both of us because it shows I’m in the zone with stuff that’s good enough not to be squared up, and I think he’s got good plate discipline, recognizing, covering things, fouling balls off,” Odorizzi said.

“That was actually really fun to watch. It kind of brings you back to just watching good baseball and watching two guys kind of battle on the field,” Baldelli said.

Friday is expected to be a lighter day for the Twins at Target Field. The team has to go through a Major League Baseball medical presentation with players and staff. Pitchers that need to will play catch, and some minor leaguers will come over from CHS Field and face Kenta Maeda and Devin Smeltzer, among others, in live sessions.

Baldelli said he’s been in contact on the phone with Miguel Sano and Willians Astudillo since they each tested positive for Covid-19, are asymptomatic and are in quarantine. Baldelli actually saw both from a distance on Friday at a separate entrance to Target Field as they were getting testing done.

Baldelli said they were in good spirits.

“Got a wave and big smile from both of them, they both feel good, they were both surprised to be even dealing with this with the way they were feeling,” Baldelli said. “They’re good, ready to go, just waiting for the nod from the tests.”

Both must have two negative tests to be able to return to practice.