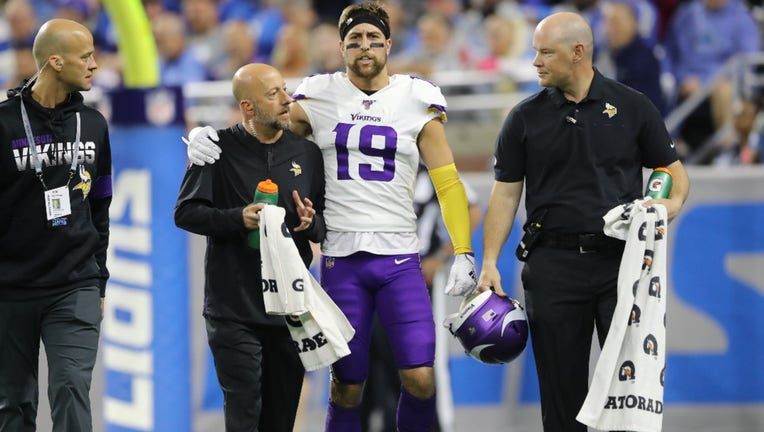 Adam Thielen #19 of the Minnesota Vikings is helped off the field after his first quarter touchdown catch against the Detroit Lions at Ford Field on October 20, 2019 in Detroit, Michigan. ( (Photo by Rey Del Rio/Getty Images) )

MINNEAPOLIS - Since issuing a public apology to wide receiver Adam Thielen on his weekly radio show that made national headlines, Minnesota Vikings quarterback Kirk Cousins has been one of the more dominant quarterbacks in the NFL.

For the third straight week, Cousins threw for more than 300 yards in a Vikings victory. He threw four touchdown passes, and Dalvin Cook had his fifth 100-yard rushing game of the season with 142 yards and two touchdowns as the Vikings beat the Detroit Lions 42-30 on Sunday at Ford Field. That's despite Thielen leaving the game after a 25-yard touchdown in the first quarter, his only catch of the game, and not returning due to a hamstring injury. They face the possiblity of not having Thielen for a quick turn-around, as the Vikings host the Washington Redskins in four days for Thursday Night Football.

The Vikings got their third straight win Sunday, improving to 5-2, and kept pace with the Green Bay Packers in the NFC North. Since Thielen's appearance on "Under Center with Kirk Cousins," Cousins has thrown for 976 yards and 10 touchdowns with just one interception. Thielen has four of those touchdowns.

In his native Michigan and in front of several friends and family Sunday, Cousins was 24-of-34 passing for 337 yards, four touchdowns and had a 141.4 quarterback rating. The Vikings had a season-high 503 yards of total offense and averaged 7.1 yards per play.

Not to be forgotten since that loss to the Bears was Stefon Diggs no-showing for practice and team meetings, facing hefty fines from the team and not putting out the fire on trade rumors. Diggs finished Sunday with seven catches for 142 yards, including a 67-yard grab late in regulation that set up the game-sealing touchdown. Including Sunday, Diggs has 17 catches for 353 yards and three touchdowns in Minnesota's last three games. He's become a primary downfield target, averaging 20.7 yards per catch.

Trailing 7-0 early, Cousins fired a bullet to Thielen in the back of the end zone on a play-action rollout. Thielen made the 25-yard catch for the score, crashed into a barrier and came up injured on the play. He left the field with the help of trainers, got looked at in the medical tent and spent the rest of the game wearing a white baseball cap on the sidelines with a hamstring injury.

He reportedly will have an MRI on Monday, but told reporters in Detroit he hopes to play Thursday night.

In his absence, Irv Smith Jr., Kyle Rudolph and Bisi Johnson combined for 14 catches for 158 yards and two touchdowns.

"You never want to lose a guy like Adam, but those other guys stepped up," Vikings coach Mike Zimmer said after the game. "The tight ends got involved today... The more we can mix it around, the less you tend to get double coverage."

The Vikings’ secondary had a tough day as Marvin Jones Jr. finished with 10 catches for 94 yards and four touchdowns, two on Xavier Rhodes. Jones entered the game with one touchdown on the season.

After getting his first unofficial touchdown in the preseason opener at New Orleans, Johnson got his first career NFL touchdown on a 1-yard pass from Cousins to tie the game 14-14 in the second quarter. The Vikings took a brief 21-14 lead in the first half after Cook’s 8-yard touchdown run.

Matt Prater hit a 46-yard field goal to get the Lions within 28-24 late in the third quarter before the Vikings attempted to pull away. Cousins hit Rudolph for a 15-yard touchdown over the middle, giving the Vikings a 35-24 lead with 5:40 left.

Rudolph, who has been tasked with more run-blocking duties this season, stepped up with Thielen out injured. He had a season-high five catches for 58 yards and the touchdown.

The Lions wouldn’t go away. Jones scored his fourth touchdown of the day, second on Rhodes, on a 2-yard pass to get Detroit within 35-30.

Cousins and the Vikings got back to work, and did what they did so well for most of the game Sunday against a beat up Lions’ defense. In a play-action rollout, Cousins hit an open Diggs deep for a 67-yard gain. It set up Cook’s second touchdown of the day from four yards out, essentially sealing a win with the Vikings up 42-30.

The Vikings’ offensive play-calling was aggressive Sunday, especially late in regulation when most teams run the ball to force defenses to burn timeouts. The aggressive nature paid off in a big way for Cousins and the Vikings.

"He's played very well," Zimmer said of Cousins' success Sunday and in recent weeks. "He's playing the best I've seen him play since he's been here. It's a credit to him, it's a credit to the offensive coaches, what they're doing. I feel like we're playing to his strength."

Eric Kendricks has been one of the Vikings’ top defensive players all season, and he led Minnesota Sunday with 12 tackles. Harrison Smith, Anthony Harris and Anthony Barr all added seven tackles, and Danielle Hunter and Everson Griffen each had sacks on Stafford. Trae Waynes had a late interception on Stafford to seal the win.

The Vikings still have plenty of things to clean up. They had six penalties for 61 yards, including five in the first half and roughing the passer flags on Griffen and Barr in untimely situations.

The bottom line is the Vikings (5-2) are returning to Minneapolis with a three-game win streak and host Washington (1-6) Thursday night.