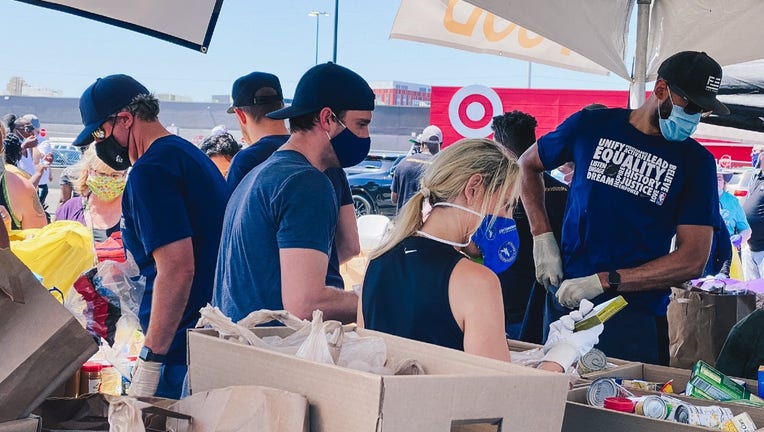 Timberwolves coach Ryan Saunders and his wife were among several local sports figures to participate in Friday's "Change Starts With Me" food and supply drive in south Minneapolis. ((credit: Minnesota Timberwolves))

MINNEAPOLIS - It’s been less than two weeks since the Cub Foods on 26th Avenue in south Minneapolis became the scene of tense protests, violence and looting in the wake George Floyd’s death.

Demonstrators took to the streets after Floyd died on Memorial Day in an incident involving four Minneapolis police officers, who were all promptly fired the following day and are now in custody and facing charges.

It’s been less than two weeks since the Target on 26th Avenue in south Minneapolis became the scene of tense protests, violence and looting in the wake George Floyd’s death

On Friday, that same Cub Foods store that was in need of significant clean-up became the scene of what many hope is change. Minnesota Vikings tight end Kyle Rudolph, along with several other local athletes and coaches, hosted a food and supply drive in the parking lot. Many who live in the community don’t have a place to shop for essential needs, with several local businesses damaged or destroyed after violent protests in the wake of Floyd’s death.

The overwhelming theme of the day: Change. Volunteers wore “Change Stars With Me” shirts and used the hashtag #United4ChangeMN on social media.

“We’re trying to make change happen and it starts with this. Our community has been hurt, our community is crying out so we’re just trying to help out in any way we can. I feel like as athletes, that’s our duty to take care of the people because they take care of us,” said Okogie, who has been very active on social media talking about racism and social injustice since Floyd’s death.

The event started at 11 a.m., but the line for those needing supplies started 90 minutes prior. More than 100 people were already in the parking lot when things got started. Those in need could get food, water, medical supplies, baby supplies, hygiene products and other essentials as Minneapolis starts to heal and rebuild from more than a week of unrest and destruction to parts of the community.

Both Okogie and Rudolph stressed how they wish the world in general was more like their perspective locker rooms. Diverse, from all different backgrounds yet they find a way to come together for a common goal.

“There’s no better example of what society should be than a locker room. We might not all agree on everything, but that doesn’t get in the way of us working together. We can be a great example of what change can be,” Rudolph said.

“It’s one race and it’s the human race. The way a sports locker room is, is the way life has to be. We all come together for a common goal, and that’s to win. I feel like as humans, we all have to come together to win and to win the game of life,” Okogie said.

Fleck put a stop to football activities after Floyd’s death and hosted meetings with players, their parents, his staff, recruits and their families. Everyone got a chance to grieve, say what they needed to say and start to heal.

Racism and social injustice can’t be eliminated overnight. Rudolph referenced his experiences growing up in Ohio, seeing them now as an adult and hoping that the world will change by the time his kids grow up. Difficult conversations have to be had, but steps can be taken.

“I think when you have really difficult conversations, they have to be had to have change. The one thing when you have difficult conversations, everybody is rushed to judge someone’s opinion. When we rush to judge and criticize them immediately, it makes people want to stop talking and makes people want to stop listening,” Fleck said. “We all need to be open and we all need to listen to everybody’s feelings, views, where they come from because that’s where we’re at. That’s how you’re going to get the most change. This is going to take everybody.”

There will be missteps and there will be tough days ahead. But for at least one day, the very store that was looted less than two weeks ago became a place of hope and peace for a community hit hard by civil unrest.

“This is how it starts, this is how the change starts,” Okogie said.