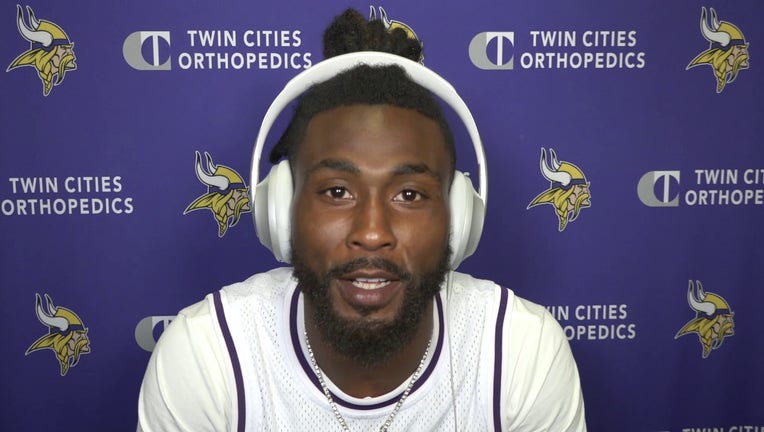 Bashaud Breeland is with the Vikings for the 2021 season after two years in Kansas City, one in which he won a Super Bowl.

MINNEAPOLIS - Every Minnesota Vikings fan knows Mike Zimmer loves his defensive backs. There are currently 11 of them on the roster as they wind down organized team activities.

Bashaud Breeland barely has his feet on the ground in Minnesota, but he already likes what he sees out of Zimmer and the rest of his defensive teammates. Breeland spent the last two seasons chasing Super Bowls with the Kansas City Chiefs, winning one, and now he’s hoping to bring some swagger to the Vikings’ secondary.

Breeland is working his way back from shoulder surgery, and signed a one-year deal to come to Minnesota. In his first session with reporters on Wednesday, he called his departure from Kansas City "a farewell, not a break-up."

"Never been on bad terms, sometimes when one door closes, another one opens. Now I’m here with the Minnesota Vikings. I knew this time would come and I’m fired up to get started," Breeland said.

There might not be a greater motivator to get better than winning a ring.

"Once you taste that type of success, you want to do it again. I can say during that time in Kansas City, that was the goal day in and day out. Once you taste it, once you find that feeling, it’s a feeling like no other," Breeland said. "Once you get it, you’re chasing it every day, every down, every play."

Breeland was a fourth round draft pick by Washington in 2014, spent four seasons there before one year in Green Bay, and the last two with the Chiefs. He now joins a secondary that is a mix of veterans and young players, including Cameron Dantzler, Patrick Peterson, Mackensie Alexander, Harrison Smith and others.

He might be in line to replace Jeff Gladney, if the team decides to move on after his offseason legal issues. Breeland was spotted at OTAs Wednesday working directly with Zimmer on footwork at practice, and likes having a hands-on coach.

"A coach that walks around like that, he’s a defensive-minded coach, he loves the corners. I’ve never really had that type of head coach. It’s kind of new, the energy that he brings and gives his players before practice," Breeland said.

Adam Zimmer, co-defensive coordinator who works mostly in the secondary, likes Breeland’s swagger and the fact that he’s won at the highest level.

"He’s won a Super Bowl as a corner so he knows what it takes to win in this league and to cover in this league. That’s valuable for us as a defense," Adam Zimmer said.

So will he play corner, in the slot or help out with the safeties? Breeland doesn’t care, as long as he’s on the field.

"If you leave it to me, I feel like I can play every position in the secondary. I feel like they brought me into be an outside corner. That’s what they want me to bring to this team," Breeland said. "Really bring the juice and the spunk and the energy to the team."

The Vikings haven’t been to a Super Bowl since 1977. Breeland has played in two straight, and won one two years ago. He wants to bring that reality to Minnesota, a franchise starving for success.

He also brings a swagger and a confidence. Breeland wore a Scottie Pippen high school jersey to Wednesday’s session with reporters.

"Hall of Fame player, he’s got just as many rings as Michael Jordan, he just doesn’t have the stature," Breeland said. "Scottie was a big part of that team, and I really feel like me and Scottie are really similar in a sense. We come in and do what we do, we just work."