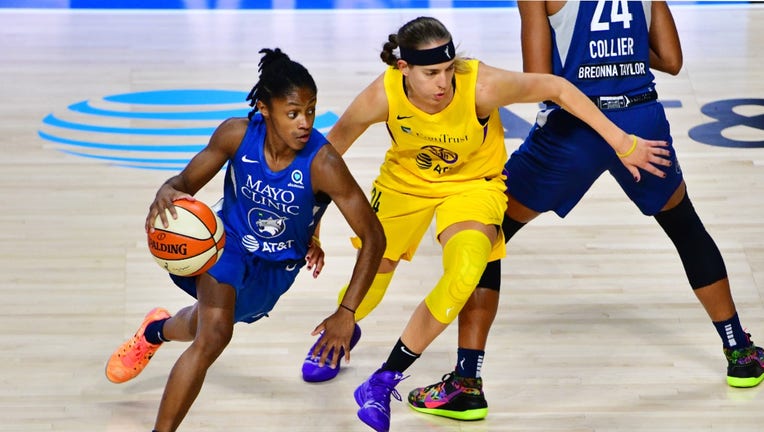 MINNEAPOLIS - Cheryl Reeve didn’t really know what to expect out of the Minnesota Lynx after a few weeks of training camp in the WNBA bubble amid a global health pandemic.

Quite frankly, the same can be said for most of the league. Reeve has won four WNBA titles with the Lynx, and there’s a standard in place when training camp starts. Get off to a good start. The Lynx have done just that, going 7-3 in their first 10 games to put themselves fourth in the league behind only the L.A. Sparks, Las Vegas Aces and Seattle Storm. They’ve done it with mixing up lineups due to injuries, and abiding by strict guidelines at IMG Academy due to the COVID-19 pandemic.

Reeve couldn’t ask for much more as the Lynx season nears the halfway point.

“I am particularly proud that through the first 10 games, we’ve had the success that we’ve had. It’s been hard,” Reeve said Tuesday.

The one constant through 10 games has been forward Napheesa Collier. She’s one of two Lynx players, joining Damiris Dantas, to start every game so far. Collier is also leading the team with more than 32 minutes per game, and she was named the Western Conference Player of the Week on Monday.

Collier averaged 18.3 points, shooting 46 percent from the field, including nearly 43 percent from three-point range, and averaged 13 rebounds, three assists and 1.7 steals per game while playing more than 32 minutes per game as the Lynx went 2-1 last week.

Collier scored 26 points, added 13 rebounds and had a career-high five assists in the Lynx’s 94-64 win over the New York Liberty on Saturday. Collier is currently 13th in the WNBA in scoring (14.9 points per game), third in rebounding, sixth in steals and seventh among forwards in assists.

She’s happy to get the award, but is more focused on the team’s 7-3 start in a 22-game season. They're also a balanced scoring team as Collier is one of four players to average double figures in scoring, and Lexie Brown knocking on the door at 9.4 points per game.

“It gives me a lot of hope and I’m really excited. We have a team where everyone is really locked into what we’re doing. They’ve really bought into the Lynx mentality and what we want to get accomplished on the way, and everyone is super coachable so it’s fun to play with a group of women like that, play for a team like that,” Collier said. “I think we play really good team basketball.”

For the season, Collier leads the Lynx at 14.9 points per game and is second with nine rebounds per game. She’s also not afraid to shoot it after going 46 percent from the field last week, including 43 percent from the perimeter.

“What makes her a great leader is her consistency. Every night, we know exactly what we’re going to get from her scoring-wise, rebounding-wise and things like that,” rookie guard Crystal Dangerfield said.

It’s the second career WNBA award for Collier, and first this season. She’s had to shoulder more of the load with Sylvia Fowles out injured, and it’s sometimes hard to forget Collier is just in her second professional season.

“We don’t care who gets the credit, but when a player does get credit, we’re really, really happy for them. But that player knows that it didn’t come through work of their own, this came through a great amount of team involvement and if there’s somebody who understands that, Napheesa Collier is that player,” Reeve said.

While Collier leads by example, she’s still working to find her voice as a vocal leader. With Fowles out and not playing Wednesday night, Collier is the only active captain playing.

“Just trying to kind of be that voice as much as I can, keeping us together and making sure everyone is on the same page,” Collier said.