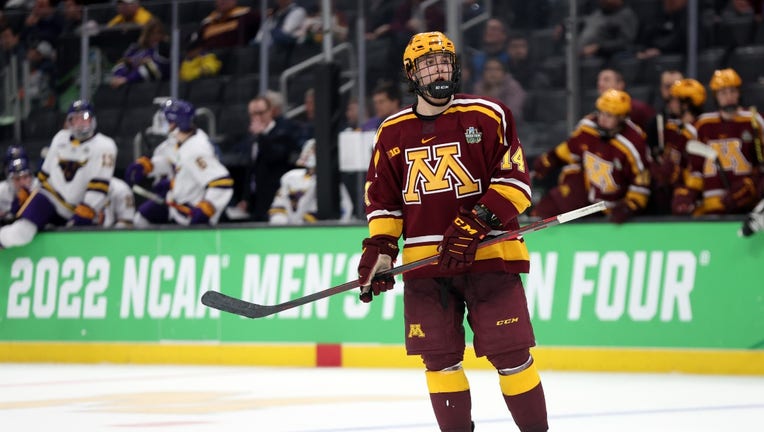 Brock Faber #14 of the Minnesota Gophers looks on during the third period of the Frozen Four semifinal against the Minnesota State Mavericks at TD Garden on April 07, 2022 in Boston, Massachusetts.  ((Photo by Maddie Meyer/Getty Images))

MINNEAPOLIS - Brock Faber was a college kid Wednesday, his head buried in a laptop writing a paper when his phone rang.

It was the L.A. Kings, who had the draft rights to Faber, that is until Wednesday. The Gophers’ sophomore and Maple Grove native was being traded to his hometown team. The Minnesota Wild on Wednesday, facing a tight salary cap situation, traded winger Kevin Fiala to the Kings for their 2022 first round draft pick, and the rights to Faber.

Gophers defenseman and newly-named captain Brock Faber talked Thursday about having his draft rights traded to the hometown Minnesota Wild.

The homework was going to have to wait. A flood of texts and phone calls followed.

"Obviously it was a pretty crazy day. It was a special one though, one that I’ll remember for the rest of my life. It was try to focus, and then there wasn’t much more school done yesterday. I tried to open my laptop again, nothing was really coming through," Faber said from Athletes Village on Thursday. "Then it was a lot of phone calls with family and friends. A lot of screen time, so it was good getting to bed and putting the phone down. Waking up this morning it kind of sunk in a little bit more, so it’s pretty special."

A text chain with his current teammates included a photo of him at a recent Wild game he attended. He was there to watch his former teammate, Ben Meyers, with the Colorado Avalanche. Kirill Kaprizov scored the game-winning goal that night and Faber was pounding on the glass behind him celebrating.

It might not be too long before Faber and Kaprizov are teammates in Wild sweaters. Faber has wanted to play for the Wild since he started playing hockey.

"Growing up in Minnesota it’s always the Gophers and the Wild, those are the two teams that you want to play for some day. Playing for the Gophers right now and possibly having the opportunity to play for the Wild in the future, it still hasn’t really quite sunk in yet," Faber said. "It gives me chills thinking about it."

Faber is back with the Gophers for his junior season. He’s coming off a career-high 14 points, including 12 assists, and was named the Big Ten Defensive Player of the Year. He’s now a two-time All-Big Ten selection.

Overshadowed in getting traded to the Wild was the fact that Gophers’ hockey coach Bob Motzko announced Wednesday Faber would be one of three captains for the 2022-23 season. He joins Jackson LaCombe and Jaxon Nelson.

"It’s pretty special. There’s a lot of names that came before me that had the privilege of wearing a letter on their jersey for the Gophers. That’s something I don’t take lightly," Faber said. "It was hard to really focus on and be thankful for yesterday because of all the news that happened. We’re very excited for this year."

Guerin had high praise for Faber in talking about the trade with reporters on Wednesday, suggesting this year is likely his last in Minnesota.

"He’s really a high-end prospect, somebody that we think is not far away from playing at all," Guerin said.

"It’s pretty cool to think about. I strive to be a defenseman for a long time in the NHL some day and obviously to win a Stanley Cup. Ever since I started playing hockey, that’s been my dream," Faber said. "Just kind of trying to build on those characteristics he complimented and try to get to a point where I’m NHL ready so I can hopefully make an impact for them."