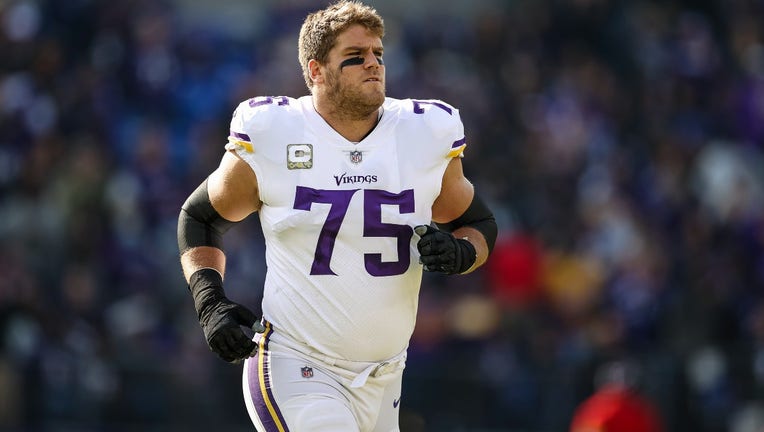 Brian O'Neill #75 of the Minnesota Vikings in action before the game against the Baltimore Ravens at M&T Bank Stadium on November 7, 2021 in Baltimore, Maryland.  ((Photo by Scott Taetsch/Getty Images))

MINNEAPOLIS - The Minnesota Vikings held their first practice Wednesday at TCO Performance Center in preparation to host the Green Bay Packers, and 10 players were listed on the team’s injury report.

Something to monitor the rest of the week: Six players either missed or were limited for Wednesday’s walk-through for what the team deemed "non-injury related" reasons. Those players are defensive back Mackensie Alexander, tight end Chris Herndon, offensive lineman Brian O’Neill and Garrett Bradbury, safety Harrison Smith and defensive end D.J. Wonnum.

None of them got hurt in Sunday’s win at the Chargers, as their non-injury related designation would indicate. But none of them appeared on the NFL’s reserve/COVID-19 list, which would’ve been indicated on the league’s transaction wire. The team could be waiting for testing results, or the players simply could've had personal matters that required them missing practice. We'll find out at Thursday's practice who is there, and who might be in jeopardy of not playing against the Packers.

The team's latest addition to the reserve/COVID-19 list was safety Josh Metellus on Tuesday. Metellus had one special teams tackle against the Chargers.

Anthony Barr returned to practice in a limited capacity after missing Sunday’s game with a knee injury. Bashaud Breeland was also limited with a groin injury. Dakota Dozier, after reportedly being hospitalized last week, was back at the facility earlier this week and went through stretching on Wednesday. Patrick Peterson also returned to practice on Wednesday after being activated from injured reserve, and he has 21 days to return to game action. Peterson said on his podcast Tuesday he expects to play against the Packers.

The Vikings snapped a two-game skid with Sunday's win over the Chargers and are a half game out of the final spot in the NFC Playoffs with eight games remaining.