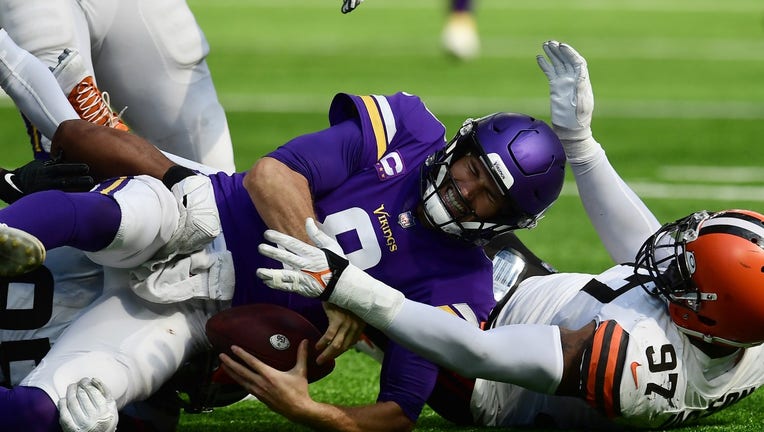 MINNEAPOLIS - The Minnesota Vikings are saying the right things after Sunday’s 14-7 loss and a 1-3 start to the season.

The morale is fine, there is no panic and they just have to play better. But at some point, you are what your record says you are. If the trend continues and the Vikings don’t end up being a playoff team, big changes are likely coming in the offseason.

The Minnesota Vikings are saying the right things after Sunday’s 14-7 loss and a 1-3 start to the season.

Here are six observations after Sunday’s loss, and another slow start in the win column.

WHAT’S UP WITH THE OFFENSIVE LINE?

Coach Mike Zimmer after Vikings loss: 'This is a good football team'

Despite the frustrating loss on Sunday, Vikings coach Mike Zimmer has no doubts about his team, saying after years as a coach he knows a talented team when he sees one. Now, he just needs his team to prove it.

The offensive line took a major step back on Sunday after two straight positive weeks. The Vikings ran for just 65 yards, Kirk Cousins was sacked twice and faced pressure most of the afternoon from Myles Garrett and Jadaveon Clowney. Rashod Hill and Oli Udoh combined to allow 18 pressures on Cousins.

"Not enough execution across the board. Execute the plays that are called better, finish blocks better, make more holes in the run game, protect Kirk, all the responsibilities of being an offensive lineman in this offense, to be honest," O’Neill said.

WHY ISN’T MIKE ZIMMER CONCERNED WITH THE RUN DEFENSE?

With Michael Pierce watching most of Sunday’s loss from the sideline with a bad elbow, the Browns ran right at the Vikings’ defense. Nick Chubb had 21 carries for 100 yards, Kareem Hunt had 14 carries for 69 yards and a touchdown. Cleveland ran for 184 yards on Mike Zimmer’s defense.

The Bengals ran for 149 yards Week 1. The Cardinals ran for 103 yards, and nearly five yards per carry. The Seahawks ran for 140 yards. That’s an average of 144 yards per game Zimmer’s defense is allowing.

"That team is probably as good a running team is there is in the league. I know everybody is concerned about it, but I’m not," Zimmer said.

CAN THE VIKINGS RECOVER FROM ANOTHER SLOW START?

The Vikings started 1-5 last season before finishing 7-9 and missing the NFC Playoffs for the fourth time in seven seasons under Mike Zimmer. They’re 1-3 now, and they finish a three-game home stand against the O-4 Detroit Lions on Sunday. The Vikings then head to Carolina before their bye week, then host Dallas out of the bye. Being close isn’t good enough anymore, they need to win now.

WHAT’S WITH THE LATE FIRST HALF MELT DOWNS?

For whatever reason, the Vikings are one of the worst teams in the NFL this season in the last two minutes of the first half. They’ve allowed 35 points, and three opponents have scored twice. Sunday, the Browns scored 11 points in the final 1:19 of the first half. The Vikings had a fourth down stop, but Eric Kendricks got a flag for holding. Zimmer on Monday called it "ticky tacky." Three plays later, Kareem Hunt scored from 1-yard out. They also got a delay of game penalty for calling a timeout they didn’t have, and Cleveland turned it into a 2-point conversion.

The Vikings’ offense went 3-and-out, and on 3rd-and-20, Hunt ran for 33 yards to set up a Chase McLaughlin field goal. That’s a series of mistakes that simply can’t happen.

KEVIN STEFANSKI BEATS MIKE ZIMMER AT HIS OWN GAME

It had to be tough for Zimmer to shake hands with Kevin Stefanski after the game. Zimmer’s former offensive coordinator, who spent 14 years in Minnesota, beat him at his own game. Stefanski’s Browns ran right through the teeth of the Vikings’ defense. They stopped Minnesota’s run game, pressured Cousins and won the line of scrimmage.

WHEN WILL ANTHONY BARR RETURN?

The Vikings’ run defense has missed Anthony Barr, who has missed the first four games with a lingering knee issue. But Barr practiced fully last week, and Zimmer said Monday he expects Barr to play against the Lions. The defense’s signal-caller should get back on the field, which should provide a boost to a team that badly needs it.

It might not be a better time for the Vikings to be hosting the 0-4 Lions.